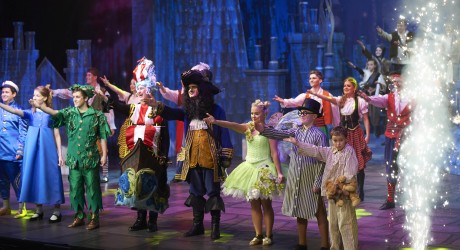 WITH Eden Court’s 2016/17 Panto Dick Whittington now on sale ( oh yes it is) the theatre has announced that the hugely popular Panto, Peter Pan, which just ended its four-week run on Sunday, sold an impressive 34,395 tickets across 55 performances – the highest number for well over a decade.

“A few years ago, everyone was predicting the demise of Panto but it seems to be more popular than ever,” explains Eden Court chief executive, Colin Marr.

“Year on year, we’re  building a bigger audience who trust that when they buy a ticket for the Eden Court Panto they’re going to see a brilliant show.

“Speaking directly to the audience and the reaction on social media – along with the local and national press reviews – indicates that everyone who came had a great time. We also know that many people came along more than once and that reflects what a great show it was.”

Eden Court marketing manager, Teresa Bendoris, added: “Panto season is really important to us and we pride ourselves on always delivering a great show alongside the team at Imagine Theatre.

“Everyone works so hard on making the panto the success that it is and the results speak for themselves.”

This is Eden Court’s 7th collaboration with Panto producers Imagine Theatre who will also be producing Dick Whittington with Eden Court for the 2016/17 Panto. Both Eden Court and Imagine Theatre are remaining tight-lipped about their next Panto collaboration but it’s being hinted that this particular version of Dick Whittington will see the hero travel through many Highland locations en route to the big city.

Dick Whittington runs from the 6th of December 2016 to the 8th January 2017 and tickets are on sale now.