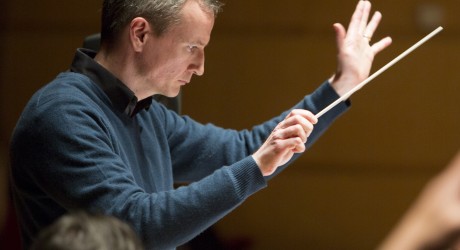 THE Royal Conservatoire of Scotland is delighted to announce the appointment of internationally-renowned musician, Garry Walker, as its first artistic director of conducting.

Winner of the 1999 Leeds Conductor’s Competition, the Scot from Edinburgh studied cello with pre-eminent American cellist, Ralph Kirshbaum, and conducting at the Royal Northern College of Music.

He also attended masterclasses with the great French composer and conductor, Pierre Boulez.

He has been Visiting Professor of Conducting at the Royal Conservatoire of Scotland for two years.

On announcing his appointment, Professor Jeffrey Sharkey, principal of Royal Conservatoire of Scotland, said: “I am delighted to have Garry Walker appointed as artistic director of our conducting programme.

“We’ve long admired the quality of Garry’s teaching and his conducting and are tremendously excited about how this closer association with the RCS will elevate our programme into being among the finest internationally.”

Garry Walker said: “I’m absolutely delighted to be joining a fantastic staff and student team at the Royal Conservatoire of Scotland at such an exciting time for the institution.

“I look forward to further developing the conducting programme at RCS and seeing the positive impact our students have in music both here in Scotland and internationally.

“It’s very much our aim to create an international centre of excellence for conducting here in Scotland.”

Garry Walker has been involved with the conducting programme at RCS for a number of years as visiting lecturer, and with our orchestral programme as guest conductor.

This new position is a natural extension of Garry’s work with RCS, particularly in the area of contemporary music, and will enable him to contribute to the artistic programming and programme development, raising standards even higher.

Building on the success of our first Leverhulme Trust bid, the RCS has recently secured further funding from the Trust to continue its excellent Conducting Fellowship, to fund a MMus conducting studentship, and to support the on-going partnership with Red Note, our associate contemporary ensemble.

These developments and Garry’s appointment will establish RCS as one of the foremost providers of conductor training internationally.

Jessica Cottis (2010-12) assistant conductor of the Sydney Symphony Orchestra from 2012 – 2014, Fergus McLeod (2012-14) is on the ENO Charles Mackerras Fellowship programme and Ciaran McAuley (2013-14) is resident conductor to the Malaysian Philharmonic Orchestra.

Winner of the 1999 Leeds Conductor’s Competition, Scottish-born Garry Walker studied cello (with Ralph Kirshbaum) and conducting at the Royal Northern College of Music. He is now artistic director of conducting at the Royal Conservatoire of Scotland and takes up the position of chief conductor of the Staatsorchester Rheinische Philharmonie Koblenz from September 2017.

With SCO, he has appeared at the St Magnus Festival, with the ECO in Lisbon and the City of London Festival and with ASMF at the Barbican’s Mostly Mozart Festival.

He regularly appears at the Edinburgh International Festival including a notable performance of Mahler’s Symphony No. 2 ‘Resurrection’ with the Royal Scottish National Orchestra.

Orchestras that he has worked with outside of the UK include the Gothenburg Symphony, Orchestre Philharmonique de Luxembourg, Collegium Musicum Copenhagen, Musikkollegium Winterthur, Deutsches Symphonie Orchester Berlin and Orchestra della Toscana.

He has conducted both Britten’s Curlew River and the world première of Stuart Macrae’s opera The Assassin Tree at the Edinburgh International Festival.

He also conducted the Macrae at the Royal Opera House’s Linbury Studio, David McVicar’s much acclaimed new production of Benjamin Britten’s The Turn of the Screw and Raskatov’s A Dog’s Heart for English National Opera, Cimarosa’s The Secret Marriage for Scottish Opera, Mozart’s La Clemenza di Tito at the Royal Northern College of Music and Poulenc’s La Voix Humaine at the Linbury Studio. In the 16/17 season he will make his debut with Opera North.

Outside the UK, he has conducted Curlew River for Lyon Opera and a new production by Calixto Bieito of Hosakawa’s Hanjo at the Ruhr Triennale.

Future plans include a return to the Auckland Philharmonia and Orchestra della Toscana as well as concerts with the Adelaide Symphony Orchestra, Orquestra Metropolitana de Lisboa, Teatro dell’Opera Roma, Philharmonie Zuidnederland, and the London Sinfonietta including a tour of Mexico.

Amongst the many international soloists with whom Garry Walker has collaborated are Maxim Vengerov, Truls Mørk, Mischa Maisky, James Ehnes, David Geringas and Branford Marsalis.

Recordings have included works by Havergal Brian and Matthew Taylor on Toccata Classics, Edward Harper on Delphian and Dvorak on Sony.

MEDIA RELEASE issued by RCS. You too can post media releases on allmediascotland.com. Email here for more information.