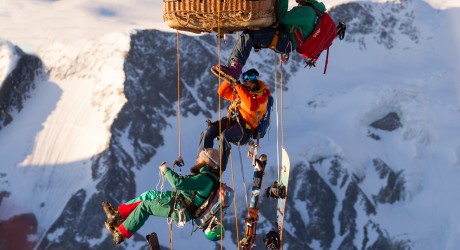 WHY do people go to the mountains? You’ll find many different answers at the 13th Edinburgh Mountain Film Festival, which runs Saturday 6 – Sunday 7 February.

For some, they go to explore, venture somewhere new and really off the beaten path.

For others, years of training can pay dividends when they complete a challenging rock climb or ski descent.

And then there are the daredevils, who need the buzz of pushing the limits to keep them sane. All such characters feature at this year’s EMFF, which promises to be a cracker.

Tickets for the popular festival start at £6 and are on sale now at www.emff.co.uk with the organisers reporting that tickets are already selling fast.

The casts of the various movies read like a Who’s Who of the adventure world: climbers, Alex Honnold and Tommy Caldwell, the late extreme adventurer, Dean Potter, leading mountain biker, Brandon Semenuk.

Then there are the unknowns: a team of ‘balloon-skiing’ pioneers, 91 year-old former mountain guide, Gwen Moffat, and a skier who goes only by the name of ‘Snowflake’.

Local heroes are well-represented too, with top climber, Natalie Berry, Inverness-based extreme skier, Peter MacKenzie, and a team of paraclimbers who take on the Eiger. As ever, the film line-up promises to entertain, enlighten and inspire.

The guest speakers at the EMFF show as much diversity as the films.

Top Scottish climber, Dave MacLeod, with a string of world-firsts behind him is the perfect example of devotion paying dividends.

Photographer and alpinist, Jon Griffith, shows similar dedication that has allowed him to capture some truly stunning images.

Andy Kirkpatrick’s years in the mountains are quite contrasting, with his adventurous spirit and apparent love of suffering resulting in some quite incredible tales. Meanwhile, top Scottish mountain biker, Lee Craigie, a former British champion and Commonwealth Games athlete is going full circle to rediscover adventure having spent years training for events.

New for the 2016 festival is a Sunday morning film show which has been designated family-friendly.

Stevie Christie, festival director, explains: “We have six fantastic adventure films to screen at this 90-minute session. It’s definitely not just for kids as the films are awesome and you won’t want to miss them. But we’ve selected these films for this session because there are no adult-themes or swearing in the films, making them suitable for all to enjoy.

“Whether you are a committed outdoor enthusiast or more of an armchair fan, or if you simply enjoy hearing enthralling stories set against incredibly beautiful scenery, there is something for you at the EMFF. And if you wish you could have adventures like the ones you see but can’t find the time in your life, we even have a short film which tells you the solution!”

The festival, staged in association with Tiso, Mountain Equipment, Gore, Coors Light and Wilderness Scotland, expects big numbers from the climbing, snowsports, kayaking, adventure sports, outdoor photography and filmmaking communities; as well as those who love the outdoors, travel and mountain adventure, from all over the UK to attend the event.

For full details of the festival and how to buy tickets go to: www.emff.co.uk

For information on the The 13th Edinburgh Mountain Film Festival, for images and to arrange interviews with festival director, Stevie Christie, or any of the guest speakers; or to arrange private viewings of selected films, please contact:

The 13th Edinburgh Mountain Film Festival takes place from 6-7 February 2016. The festival is staged in the George Square Lecture Theatre at Edinburgh University.

Tickets cost from £6 – £12 and are available now from www.emff.co.uk or on the door, subject to availability. Some sessions will sell out in advance.

The festival aims to promote mountain culture and provide a platform for adventure film-makers to showcase their work. In short, to entertain, enlighten and inspire. It also acts as a social gathering for Scotland’s vibrant outdoor scene. Finally, it raises funds for Mountain Rescue and the John Muir Trust.

The festival features lectures by leading mountaineers, adventurers and explorers, many short films and various exhibitions. The full line-up can be found on the website – www.emff.co.uk .

You may wish to view these trailers for the films referred to in the release:

The major sponsors of the Edinburgh Mountain Film Festival 2016 are:

The festival is also supported by Alien Rock, the John Muir Trust, the National Trust for Scotland and EDV Productions. The festival is always keen to hear from companies or organisations who are interested in being a sponsor.