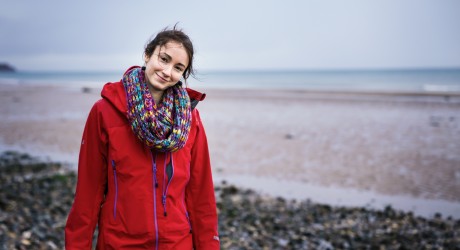 The award, now in its second year, is part of a wider project between the two organisations to celebrate adventurous young people, the landscapes they choose to explore and the outdoor pursuits in which they excel.

Natalie is 23 years-old and grew up in Glasgow. She started climbing at the age of eight and was asked to join the British Junior Climbing Team when she was 11.

Over the subsequent years, she had considerable competition success, winning eight British climbing championship titles and many European youth podium places including a first place at the European Youth Series in Slovenia in 2007.

Since then she has proved herself as one of the nation’s best sport climbers.

An ambassador for Urban Uprising and Climbers Against Cancer, Natalie actively gives her all to ensuring teenagers from deprived areas around the world are given educational programmes and a chance to explore the outdoors, as well as raising funds for cancer research all over the world.

Through her role as coach and mentor with Quickdraw Climbing Club and the British Junior Team she has supported many of the young climbers who are now doing extremely well on the international competition circuit.

Not content with climbing, coaching and charity work Natalie made one of the hardest traditional ascents in Scotland in October 2015 when she successfully tackled Dalriada (E7) on The Cobbler.

This achievement was particularly noteworthy given that Natalie had no mountain, winter, alpine or traditional climbing experience before 2013.

Her progression from sport / indoor climbing has been documented by a film crew and ‘Transition’ premiered at Kendal Mountain Festival in November 2015.

Dave MacLeod, climber and member of the Fort William Mountain Festival Committee, said: “In my view, Natalie represents an exemplar in influencing other young people by showing it is possible to achieve high levels of personal sporting success at the same time as making many other types of contribution, through media, charity and club involvement related to her expertise.”

Natalie will join legends of mountaineering, including Zeki Basan, the inaugural Scottish Youth Ambassador for Mountain Culture (2015), in the Mountain Culture Hall of Fame when she is presented with her award on Saturday 20 February at the Fort William Mountain Festival (which runs in and around Fort William and Lochaber, the ‘Outdoor Capital of the UK’, from 17 to 21 February 2016)

To find out more about the Fort William Mountain Festival 2016 go to: http://www.mountainfestival.co.uk/

If you are keen to attend the Fort William Mountain Festival for a commissioned travel feature or adventure / activity feature please contact Paddy CUthbert to discuss a funded press trip to the Outdoor Capital of the UK.

Scottish Youth Ambassador for Mountain Culture: Amongst the criteria for the Scottish Youth Ambassador for Mountain Culture award the young recipient needs to have shown resilience and determination to succeed within their chosen area of expertise (linked to an outdoor theme), shown results through their own efforts and ideas, given back to their community, succeeded in the face of adversity; whilst being thought of as an example of excellence by others.

The Nevis Landscape Partnership Programme is a five year £3.9m scheme, consisting of 19 projects aiming to encourage the public to engage with the natural and cultural environment of both Ben and Glen Nevis. Across the programme, there are opportunities for people get involved through volunteering, school participation, experience events and training opportunities. In addition we have a major ‘leave no trace’ interpretation project to promote sustainable use of the area.

Our key partners are:

Heritage Lottery Fund, Scottish Natural Heritage, Highland Council, Forestry Commission Scotland, John Muir Trust & The Nevis Partnership who are the host organisation for the programme. In addition we have a number of smaller funders feeding into specific projects.

Recipients of the Scottish Award for Excellence in Mountain Culture include: