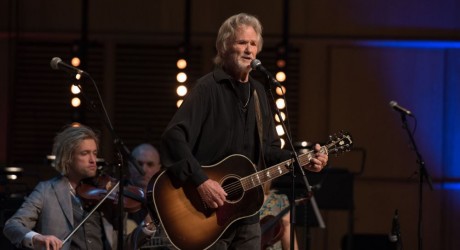 ONE of the world’s biggest winter music festivals, Celtic Connections, comes to our screens as CUIRM@CELTIC returns to BBC ALBA.

Opening a four-week run of the series is one of the biggest and most lauded events of the festival, as Irish legends The Chieftains took to the stage at Glasgow’s Royal Concert Hall.

The event, curated by the irrepressible Paddy Moloney, brought together a cast of outstanding performers, and the concert hall audience responded with three standing ovations.

Moloney, renowned for bringing top acts together, brought together singers from Ireland, Scotland and North America to celebrate Ireland’s cultural impact and legacy over the last 100 years.

Special guest was none other than country music legend, Mr Kris Kristofferson, with a rendition of his classic hit, For the Good Times.

Alongside The Chieftains’ trademark high-energy instrumentals, and Gaelic vocals from Alyth McCormack, Moloney had assembled a troop of Irish dancers, the Glasgow Gaelic Choir, an all-star pipe band and a concert orchestra.

Staged to mark the 100th anniversary of Easter Rising, the concert featured many other musical luminaries. A highlight was without doubt Dublin song sorcerer, Declan O’Rourke’s incredible rendition of his song Children of ’16, beautifully accompanied by fiddler, John Sheahan of The Dubliners, while Eddi Reader backed by full concert orchestra, had the audience in the palm of her hands.

The concert climax was something to behold, as The Chieftains’ skillfully orchestrated an extended finale, inviting ceilidh-style solos from each performer – including Kris Kristofferson’s heart melting performance of Me and Bobby McGhee.

Paddy Moloney, of The Chieftains, said: “It’s great to be back at Celtic Connections here in Glasgow, in a very special year. We have a huge show  – it’s not just the old Chieftains; we’ve got lots of guests. Kris Kristofferson, whom I’ve known since the ’70s. We’re delighted to have Karan Casey and one of your great singers, Alyth McCormack.”

CUIRM@CELTIC has been produced for BBC ALBA by Bees Nees Media in association with TG4 and will broadcast on Saturday 30 January at 8.55pm.