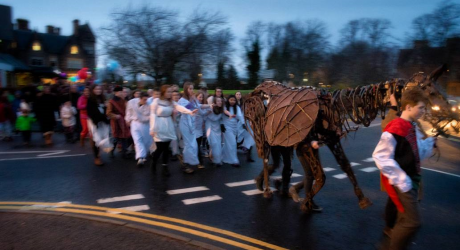 EDEN Court CREATIVE hosted their Big Burns Stramash on Saturday 23 January, with hundreds of families attending to join in the Bard’s birthday celebrations.

Families were invited along to a day of free activities at Eden Court including The Haggis Highland Games, Learn the Ghoulish Jig (a chance to learn a new Scottish dance for the ceilidh later on) and drop-in Lantern Making workshops to get themselves prepared for a lantern-lit procession at twilight.

In the Playhouse cinema were several screenings of the Stramash-Up! film schools project – where sections of Tam O’Shanter performed by ten local primary school had ben edited together by the CREATIVE Team into a short film. An extra screening had to be added on the day due to the high demand for seats!

As the sun was setting, a crowd of more than 200 people gathered outside Eden Court to watch a live performance by Eden Court’s National 5 Drama students, retelling the opening scene from Tam O’Shanter.

As Tam and his beautifully-crafted mechanical horse, Meg (brought to life by Greg Dobson, Caitlin Turnbull and Eilish Turnbull), fled the ghosts and ghouls of the Kirk, the City of Inverness Youth Pipe Band lead the procession on behind them.

As the procession crossed Infirmary Bridge, the handmade lanterns in various colours stood out in the darkness and shone brightly while the crowd made their way back along the riverside to Eden Court.

The procession was followed by a sold-out Wee Burns Ceilidh where children and families of all ages whirled their way through dances and games and finally toasted the Bard with shortbread and a wee glass of Irn-Bru!

Finally the Big Burns Ceilidh rounded off the day and gave adults the chance to let their hair down without the kids. Live music from the Ceilidh Commandoes – a one-off ‘supergroup’ featuring Gary Innes (Manran), Ewen Henderson (Manran), Alec Dalglish (Skerryvore) and Martin O’Neill (Treacherous Orchestra) – kept the crowd on their feet all night and everyone left on a high.

Eden Court CREATIVE manager, Lucy McGlennon, said: “The band were fantastic hosts, we look forward to welcoming them to Eden Court again in the future. We were delighted to have so many families attend the Big Burns Stramash too; whether taking part in our workshops, seeing the screenings, or just making a lantern and joining us for the procession everyone seemed to really enjoy themselves and there was a great Burns buzz around the place!”