Media Release: Celebrate the end of ‘dry January’, with a German beer 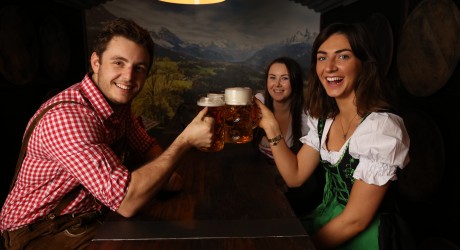 NOW that the widely-observed, self-imposed beer ban – aka ‘Dry January’ – is almost over, beer fans’ thoughts will be turning to deciding which beer to break their month-long beer fast with.

Begins a spokesperson: “It is claimed that beer has many health-benefits when consumed in moderation.

“It is a source of fibre, has been shown to aid bone density, and contains minerals, essential amino acids and vitamins, including B6 which you need if you want to avoid skin problems, insomnia and irritability. But as all the cool-kids know, it’s all about drinking less, but drinking better.

“German beers are world-renowned for their quality, so drink smart and drink like a German.”

Ahead of the upcoming 6 Nations tournament, a key date in many a beer fan’s diary, Edinburgh’s first real Bier Keller, offer you seven reasons why drinking like a German will help you in your pursuit of ‘hoppyness’:

1. German beer is generally purer – many brewers still stick to the ‘Reinheitsgebot’ (the beer purity law which specifies exact ingredients and is celebrating its 500th anniversary this year).

2. Germany is experienced at brewing beer – it is home to what is claimed to be the world’s oldest brewery; the Weihenstephan Monastery Brewery outside Munich, established in 1040.

3. It’s a family affair – German beer is made by groups who follow recipes handed down through several generations.

4. It’s a numbers game – Germans are passionate about their beer with more than 1,200 breweries (that’s four times as many as all other European Union countries combined).

6. Germans are serious about their beer – they have a beer pipeline, several miles long, to connect over one hundred bars at a football stadium to prevent them running out.

7. beer halls have the best outfits – who doesn’t love Lederhosen?

Bier Keller bar manager, John McCausland, said:  “For those looking to ‘drink like a German’ we bring a flavour of Bavaria to the capital all year round. We have a selection of excellent German beers on offer and are the only venue outside the M25 to offer the legendary Radeberger on draft.

“Our staff know their hops from their barley and know how to throw a great party – our Bier Keller is the ultimate destination to watch the 6 Nations rugby tournament from 6 February. Every match will be shown live and the wearing of country colours as well as passionate renditions of national anthems shall be heartily encouraged.”

The famous Frankenstein bar on George IV Bridge has creaked open its basement doors to reveal a traditional German beer cellar which is the ultimate party destination for stag and hen parties, as well as big group events.

The 165m2 Bier Keller, shows Premier League football and will be showing all the 6 Nations fixtures. There are VIP areas, booths and alcoves available for hire, with seating at traditional long wooden tables for up to 160. Food on offer includes culinary favourites’ including bratwurst, schnitzel and apple strudel.

Hi-res versions of the attached images are available.

Issued on behalf of Frankenstein’s Bier Keller by The BIG Partnership.