Media Release: Piper puts his shoulder to the wheel of fortune 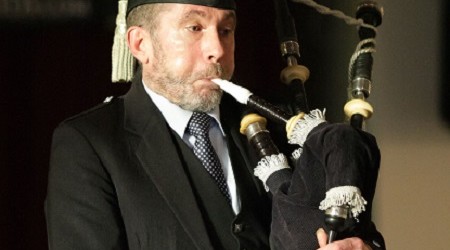 WITH less than a week to go, a top piper has boosted the ninth annual Pipe Majors’ Wheel of Fortune competition, with an offer to compose a tune for the winner of an online auction.

Allan MacDonald – a piper, composer, singer and multi-instrumentalist in the Gaelic tradition – will write a two-parted tune, in any idiom, for the auction winner. The person who makes the highest bid will also be able to name the tune.

The winner, and the funds raised via the auction, will be announced before prize-giving at the Wheel of Fortune contest, organised by the City of Edinburgh Pipe Band on Saturday 13 February.

Welcoming MacDonald’s support for his band and the Wheel of Fortune event, Pipe Major Barry Donaldson said: “Allan dropped in to one of our band rehearsals towards the end of last year.

“He was looking for a chanter reed and after trying out a few we had a good chat, which ended with Allan agreeing to write a tune for auction at the Wheel of Fortune.

“We’re delighted by Allan’s generosity and are sure there will be global interest in the opportunity to bid for a tune written by a composer of his ability and reputation.

“Down the line, there’s every chance that the tune Allan composes will be played by top pipe bands and solo players.

“The online auction provides piping enthusiasts throughout the world with the opportunity to bid for a place in history.”

Meanwhile, the competition sponsor, Wm Sinclair and Son, have donated a set of bagpipes to be auctioned on the day.

Welcoming the firm’s support, Pipe Major Donaldson said: “The Sinclair name is known throughout the world and the City of Edinburgh Pipe Band is proud to play the chanters which Alastair produces.

“My old band, Strathclyde Police, played Sinclair chanters during the glory years, while bands like Inveraray and District and Simon Fraser University have used them more recently. I’m sure lots of pipers will be interested in winning what is a lovely bagpipe.”

The Wheel of Fortune competition requires entrants to spin a golden chanter – the part of the bagpipe which produces the melody – to determine the music they will perform on the day. The players get judged on their playing ability and how well they entertaining the audience.

A field of top pipers from Scotland and Northern Ireland will take part in the event, which will be held in Danderhall Miners Club, near Edinburgh.

Allan MacDonald is a winner of the Gold Medal at the Northern Meeting in 1984 and the Clasp in 1989 and 1990, MacDonald is perhaps best known for his skills as a composer and for a bold style of playing shaped by Gaelic history.

Wm Sinclair and Son are based in Leith, the firm has been making pipes in Scotland’s capital since 1933. The instrument is hand made by Alastair Sinclair and is sure to attract a great deal of interest from pipers who want to benefit from the skills of a master craftsman. More details at http://www.sinclair-bagpipes.co.uk/

The top pipers from Scotland and Northern Ireland taking part are:

* Jonathan Greenlees, a winner of six world titles with Field Marshall Montgomery and winner of the Dunvegan Medal in 2008

* Finlay Johnston, Gold Medallist at the Northern Meeting in 2015 and a member of the reformed Spirit of Scotland Pipe Band

* Brian Lamond, a former Pipe Major of Dysart and Dundonald and winner of the Wheel of Fortune in 2015

* Callum Beaumont, a member of the Spirit of Scotland and winner of the Clasp at the Northern Meeting in 2015

* Alasdair Henderson, Pipe Sergeant of Inveraray and District Pipe Band and winner of the Silver Medal at the Northern Meeting in 2013

* Chris Armstrong, Pipe Major of Scottish Power and Gold Medallist at the Northern Meeting in 2003

The City of Edinburgh Pipe Band competes in Grade 2 and is the senior band in Scotland’s capital.

For enquiries about this press release or to arrange an interview or press pass, please contact Paul White at the City of Edinburgh Pipe Band, by calling 07941 679015 or sending an email to paulwhite2@blueyonder.co.uk.

MEDIA RELEASE issued by TMSA. You too can post media releases on allmediascotland.com. Email here for more information.