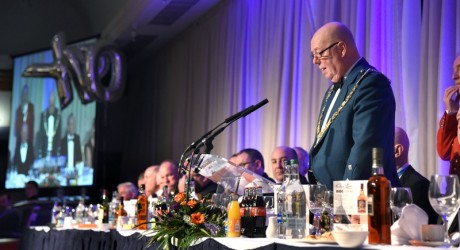 Over 1,000 guests from Scotland’s licensed trade industry were at their generous best during the event, at the Glasgow City Hotel, where they enjoyed a programme of fine dining and entertainment from guest speakers, Sandy Strang and Willie Young.

All funds raised at the event go towards the charity’s range of services which help both former and current workers of the licensed trade who are facing difficulties. Whether it’s social, financial or emotional support, The BEN helps anyone who has worked full-time in the Scottish licensed trade for at least three years.

On top of its general support, The BEN also owns the BEN Pitlochry Estate, consisting of 18 bungalows, where it provides accommodation for current and retired members of the industry as well as ‘Respitality’ breaks for carers.

Speaking at the event, Chris Gardner, chief executive of The BEN, said: “It’s been another great event and we’re overwhelmed by the generosity of our guests. We can’t thank them enough for their ongoing support and our gratitude also goes to Sandy and Willie for the fantastic entertainment.

“The annual dinner is our biggest event and has a significant impact on the support and services we provide. It’s very humbling to see the Scottish industry come together for the charity and we’ll be going all out to make next year’s event an even bigger success.”

The BEN’s president, David Morton, added: “The BEN Dinner is always an impressive occasion and I’d like to thank Chris for putting on yet another brilliant evening. A tremendous amount of effort goes into the planning and delivery of such a large event and her commitment is vital to the charity and its services.

“The industry has again come out in force to support The BEN and we look forward to working with our supporters and partners as we move forward in 2016.”

More information on The BEN, its services and memberships can be found at www.bensoc.org.uk.

Issued by The BIG Partnership on behalf of The BEN.