Media Release: FilmG awards to be streamed live online for the first time 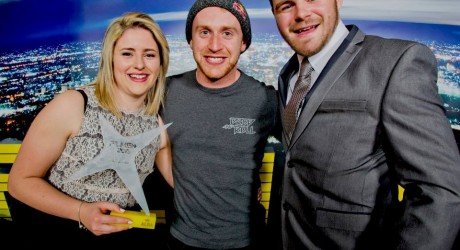 THE awards ceremony for Scotland’s national Gaelic film competition is be to streamed live on the internet for this first time this year.

The FilmG awards, which takes place at the Old Fruitmarket in Glasgow on Friday 19 February, will be broadcast via the competition’s website (www.filmg.co.uk), allowing FilmG supporters and participants who can’t attend to watch the evening’s prize-giving and entertainment unfold.

With the competition adding a Best Mobile Short prize this year to augment to this year’s other new categories for Best Script, and Best Animation, the live streaming adds to the increasingly accessible and interactive nature of the FilmG awards.

And this year, award attendees and viewers watching the live stream will also be able to enter a new on the night Gaelic Instagram competition.

During the first half of the event, attendees and those watching at home will be asked to post the most fun, entertaining and/or creative Gaelic photo to the popular social media site Instagram, under the hashtag #FilmG.

At the interval, the judges will review the photos and choose a winner – which will be announced at the end of the night – and who will receive a GoPro camera.

Floraidh Forrest, project manager of FilmG, said: “Excitement is building as we count down towards the eighth annual FilmG awards ceremony and we are delighted that we are able to stream the ceremony live on the internet for the first time this year.

“Not all participants – especially in our youth category when large classes of pupils come together to produce a film – are able to attend. Together with many FilmG supporters, who often provide significant behind-the-scenes support throughout the year, the live broadcast will allow them to sample the evening’s entertainment and see who picks up the deserved awards.

“We are also looking forward to the new Instagram photo competition. We think it’s a great way of getting more people to post to social media in Gaelic. Last year, we had printed Gaelic hashtags on the tables and these proved to be great fun and many a selfie was taken! We hope to replicate this light-hearted way of using social media in order to promote the Gaelic language and the competition.

“We’ve had great success with social media at past FilmG awards, with a little support from Danny MacAskill who attended last year and tweeted from the event. We hope the Instagram competition will be just as successful, especially amongst viewers at home and around the world.”

Amongst the live entertainment on the evening will be a set from acclaimed four-piece band, The League of Highland Gentleman.

Floraidh added: “Although the focus is on encouraging the talents of budding filmmakers, the awards’ organisers are also keen to encourage our other creative sectors. We are delighted that The League of Highland Gentleman will be joining us to take to the stage and although they are only a year into their life as a band, they’ve already received widespread acclaim and won the Up and Coming Artist of the Year award at the MG ALBA Scots Trad Music Awards.

“We hope that the live streaming of the event will allow them to gain a few more fans for their exceptional blend of traditional and electronica music as they take to the stage at the Old Fruitmarket.”