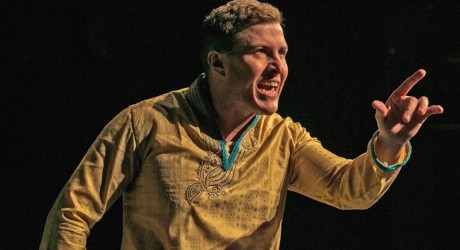 THE country’s first gender-blind classical theatre company is bringing its ground-breaking production of Shakespeare’s A Midsummer Night’s Dream to Eastwood Park Theatre, in the south side of Glasgow.

Merely Theatre productions have both genders of actors playing male and female characters on stage at the same time.

Midsummer Night’s Dream is being performed on Tuesday, February 16, at 7.30pm as part of a national tour produced by The Production Exchange and supported by Arts Council England.

Artistic director, Scott Ellis, explained: ”When Shakespeare was writing, all actors were men who played all the roles, both male and female.

“Now actors are men and women, and in Merely Theatre, actors play all the roles, both male and female. Their own gender simply doesn’t matter in the telling of the story, just as it didn’t in Shakespeare’s day.

“A lot of female characters in Shakespeare are subordinate, or small, roles. The biggest female character is Rosalind, and Hamlet has about three times as many lines as she does. We believe that there should be equal opportunities for male and female actors.”

Company actor, Emmy Rose, said: “We’re not doing this as a gimmick, or because it’s politically correct. We simply take gender out of the equation. We’ll be bringing a company to Eastwood Park Theatre that sees men playing female parts and women playing male parts.

“Like watching something with subtitles, after the first five minutes you probably won’t even notice, and that’s how it should be.”

Chief executive of East Renfrewshire Culture and Leisure Trust, Anthony McReavy, said: “Any well-performed Shakespeare play is worth seeing, but Merely Theatre’s gender-blind production gives an added dimension to Midsummer Night’s Dream thanks to the uniquely modern approach to casting.”