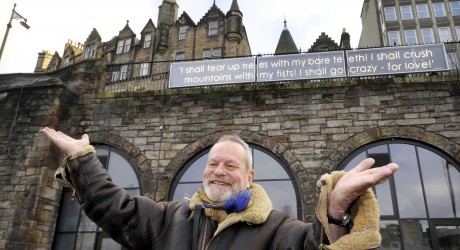 “I shall tear up trees with my bare teeth! I shall crush mountains with my fists! I shall go crazy – for love!”

The neon quotation is part of the Words on the Street project being run by Edinburgh UNESCO City of Literature Trust, celebrating the power great books have to inspire great artists and Edinburgh’s strength as a centre for books and publishing.

Gilliam – whose autobiography, Gilliamesque, was published by Edinburgh publishers Canongate Books last year – is famed for citing Don Quixote as a major influence on his life and work.

Says a spokesperson: “Gilliamesque details Gilliam’s fascination with Cervantes’ Don Quixote, which sent Gilliam on his own mission to make it into a film, currently an ongoing project titled, The Man Who Killed Don Quixote.”

Terry Gilliam said: “I chose that quote because it represents the heart of my 25 year cinematic quest, which I am still on, to make The Man Who Killed Don Quixote.”

Gilliam made his name as an artist and member of Monty Pythons’ Flying Circus, and has directed numerous films including Brazil, 12 Monkeys and Fear and Loathing in Las Vegas. Gilliam’s Don Quixote quote will be on display on Jeffrey Street, metres away from the first Canongate offices at number 17, to celebrate Valentine’s Day.

Ali Bowden, director, Edinburgh UNESCO City of Literature Trust, said: “It’s fantastic to have Terry Gilliam working with us and sharing his love for Don Quixote with the people of Edinburgh. This is truly a unique way to mark Valentine’s Day, and the perfect way for this City of Literature to celebrate its amazing publishing heritage.”

Lord Provost Edinburgh commented: “Edinburgh has a wonderful rich literary history as UNESCO’s very first City of Literature – the very streets of the city have inspired writers over the centuries. This light installation by the City of Literature Trust and Terry Gilliam, not only celebrates love in time for Valentine’s Day this year but emphasises that we are a city that cherishes books, words and ideas.”

Aly Barr, acting head of Literature, Languages and Publishing, Creative Scotland, said: “Terry Gilliam makes arresting, thoughtful films that invite audiences to stop and think. It’s therefore appropriate that he’s the one to unveil a quote that will invoke similar responses in passers-by on Jeffrey Street. In the hands of Gilliam, stories are full of passion, energy and madness. In the hands of Cervantes, love is the same.”

Words on the Street is an initiative by Edinburgh UNESCO City of Literature Trust. The project has been funded by the City of Edinburgh Council, the New Waverley Community Fund and Union Projects, and is delivered in partnership with Canongate Books and Jump Marketing.

The cityofliterature.com website has news and features about the Words on the Street project, the city’s connection with Cervantes’ Don Quixote, Terry Gilliam and Edinburgh’s publishing story.

Follow #wordsonthestreet to find out more about the project, Edinburgh’s publishing story and the city’s UNESCO City of Literature status.

MEDIA RELEASE issued by Wendy Niblock. You too can post media releases (aka press releases) on allmediascotland.com. Email here for more information.