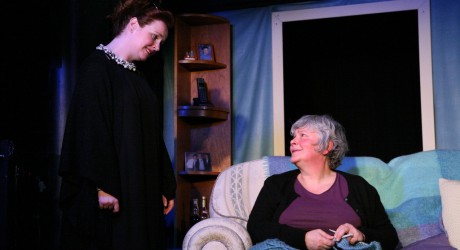 NETTING was first presented as part of a A Play, A Pie and A Pint at Òran Mór (Glasgow) and The Lemon Tree (Aberdeen) in February 2015 and received both critical and public acclaim.

This Scotland-wide tour opens on Friday 11 March and is a co-production between playwright, Morna Young, director, Allie Butler, and Woodend Barn, Banchory.

NETTING boasts a stellar cast, including CAROL ANN CRAWFORD returning as KITTY, alongside SARAH MCCARDIE in the new role of SYLVIA, with MORNA YOUNG joining the cast to play the role of ALISON.

NETTING is a story of fishing widows trying to live their lives after a tragedy. A story about real women – strong but flawed – the play explores how grief changes their relationships.

Keep busy, eh? Hope we’ll get a body, mebbe. The widden spoon. A knock on the door wi a wooden spoon.

A father and his two sons are lost at sea. Three women adapt to their lives as widows. Kitty can’t stop knitting. Alison needs looking after. Sylvia wants to forget. Then, one day, a knock on the door. A body has been found. One body, three women. Who does it belong to?

Set in the north of Scotland, NETTING is a story of finding closure after unimaginable loss.

Written in Doric and set in a small fishing village in the North-east, playwright, actor and musician, Morna Young, took inspiration from the many “strong” women in her family.

She said: “As a born and bred fishing quine from Burghead, I grew up surrounded by amazing women, many of whom have experienced their own tragedies and, although a fictional story, I took inspiration from their great spirit, dark humour and wonderful personalities.”

She added: “There’s a really special quality in many North East women – the ability to say something that makes you want to laugh and cry – and I wanted to capture that honesty. It’s important to me to present ‘real women’ with ‘strong’ characteristics.”

Developed as part of Morna Young’s New Playwright’s Award 2014 (Playwrights’ Studio, Scotland) and first presented at A Play, A Pie and A Pint at Òran Mór as part of its successful lunchtime programme.

Young’s debut play, Lost at Sea, is currently in pre-production with Eden Court Theatre, Inverness for a 2017 production. Inspired by the loss of Young’s own father to the ocean, it is a personal tribute to the fishing communities of the North East of Scotland. Whilst Lost at Sea spans 40 years of the fishing industry in an epic story of man versus the elements, Young wrote NETTING – the sister play – to explore a specific incident and to examine female relationships.

MORNA YOUNG is a playwright, actress and musician from Elgin. She won the New Playwright’s Award 2014 (Playwright’s Studio Scotland) and developed NETTING as part of this. Her full-length play, LOST AT SEA, spans 40 years of the fishing industry and is in pre-production with Eden Court following a sold out rehearsed reading (co-produced by Stellar Quines, Out of the Darkness and Moray Council).

Other credits include: NEVER LAND (Eden Court) and B-ROADS (co-written with David Rankine for Play Pieces). She has performed extracts of her work at the Scottish Parliament and the European Authors’ Festival (Czech Republic, Slovakia, Poland).

She was arts/lifestyle columnist for The Northern Scot in 2012. A multi-instrumentalist and singer/songwriter, she has performed with Kevin McKidd’s band THE SPEYSIDE SESSIONS, THE FISHWIVES CHOIR (recent appearances include The One Show and BBC Breakfast) and composed for several theatre shows.

As an actress, she has performed for The National Theatre of Scotland, Royal Lyceum, Aberdeen Performing Arts, Beacon Arts Centre and is an associate artist of Out of the Darkness and tidy carnage. Morna primarily writes in her native dialect Doric and is a proud Scots Language Ambassador (Education Scotland). For more information, please see: www.mornayoung.com

ALLIE BUTLER is a freelance director and artistic director of tidy carnage.

Allie trained in London and has directed for venues there including Baron’s Court Theatre, Theatre 503, BAC, Southwark Playhouse, Shunt, the Etcetera, the Mercury Theatre and Clean Break. In 2011 Allie moved to Glasgow and set up tidy carnage.

For tidy carnage, Allie has created and directed their flagship shows: dream//life, Passion and REaD which have been performed at the Lemon Tree, the Arches, the Bike Shed, Vault, Old Vic and the Women’s Week Festival. Allie directs regularly for new writing events with Playwrights’ Studio, the Traverse and the Tron. She is associate artist with Company Chordelia.

WOODEND BARN: Since the formation of Woodend Arts in 1994, Woodend Barn has grown into the leading multi-arts organisation in North-east Scotland.

We nurture and celebrate creativity in all its forms, showcasing innovative, informative and entertaining artistic work all year round – allowing local audiences to benefit from high-quality events without travelling for miles whilst also drawing audiences in from further afield.

We aim to be a world-class arts organisation, pushing the boundaries of all art forms while celebrating our environment, and working with our communities, volunteers and artists to be one of the leaders in arts development in Scotland.

We serve our communities and audiences by delivering an outstanding programme of arts events and workshops. Now in receipt of Regular Funding and chosen as one of the four Creative Scotland Producer Hubs, we are committed to furthering our reach and promoting excellent quality theatre and participation opportunities to audiences throughout Scotland.

MEDIA RELEASE issued by Wendy Niblock. You too can post media releases (aka press releases) on allmediascotland.com. Email here for more information.