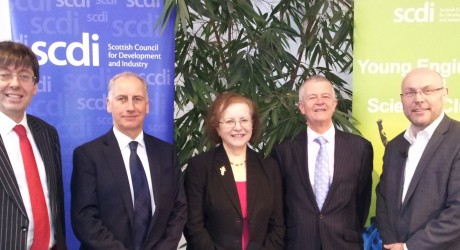 AT SCDI’s AGM at the Royal Botanic Garden Edinburgh on Thursday 25 February 2016, former board directors, Trevor Garlick and Jack McLaren, were both awarded SCDI Fellowships in recognition of their contribution and service to the organisation.

Such awards are made to individuals in recognition of their significant service to SCDI and contribution to economic development in Scotland and internationally.

Trevor Garlick stepped down from the SCDI board in December 2015 following his retirement from his role as regional president – North Sea for BP.

Trevor has offered huge support to SCDI’s work in the time he has been involved with the organisation. In particular, he devoted outstanding commitment and expertise to leading the energy workstream in SCDI’s ‘Future Scotland’ programme prior to the 2014 referendum, resulting in a substantial piece of research work with evidence-base and insight.

Jack McLaren has served as finance adviser to the SCDI board for seven years, and, in so doing, has overseen all the aspects of SCDI’s financial operations including audit and remuneration, pensions and investments responsibilities.

This has entailed a significant amount of time and dedication for which SCDI are immensely grateful. Jack retires later this year from his professional life as partner with Johnston Carmichael, and he stepped down from the SCDI board at the 2016 AGM.

Upon presentation of the awards, SCDI’s chief executive, Ross Martin, said: “SCDI exists to support and strengthen Scotland’s economy, a role which is built upon the insightful input of our members.

“Jack McLaren and Trevor Garlick have provided invaluable advice and support to SCDI over the many years of their involvement, both from their individual professional perspectives and also through their wider engagement in the development of our work.

“The SCDI Fellowship is our grateful recognition of the role which each of them have played.”

Jack McLaren commented: “It’s been a pleasure to have been on the board and serve SCDI, working with board colleagues and members of staff.”

SCDI honorary Fellowships are awarded to Individuals in recognition of their significant service to SCDI and contribution to economic development in Scotland and internationally.There can be only 50 fellows at any time and the current list can be seen at: http://www.scdi.org.uk/about-us/scdi-people/scdi-fellows