Media Release: ‘Get a kilt and cut aboot’ 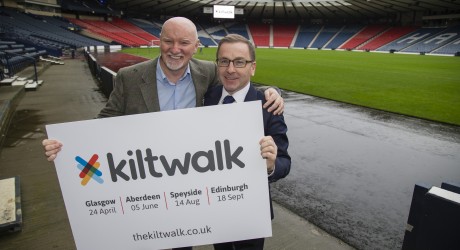 WHILE unwinding after a marathon tour, comedian, Kevin Bridges, has – in his own unique style – called on the people of Scotland to take on their own long-distance challenge: the Kiltwalk.

The Scots funnyman made a plea to his one million-plus Twitter followers to “get a kilt and cut aboot and raise loads of money for charity” in a video championing the charity event.

The first Royal Bank of Scotland Kiltwalk this year is on Sunday April 24 – from Hampden Park in Glasgow to Balloch, passing through Bridges’ hometown Clydebank, and Kiltwalkers can choose any charity which supports Scotland’s children to raise funds for.

The 29 year-old stand-up said: “Hello there, Kevin Bridges here, talking to his phone to let you know about the Kiltwalk which is back for another year.

“The Kiltwalk, if you don’t know, is just walking about in a kilt to raise money for a charity of your choice. All the costs will be underwritten by my good pals at the Hunter Foundation. “

Kevin Bridges’ Speyside followers will no doubt make themselves known, after the comedian confessed he doesn’t know where it is when listing the 2016 Kiltwalk schedule.

With four events in total, walkers from across Scotland will take big steps for little people in Glasgow on April 24, Aberdeen on June 5, Speyside on August 14 and Edinburgh on September 18.

Kevin signed off the video in his own inimitable fashion: “Good luck and get out there and raise some dosh.”

Paul Cooney, CEO at The Kiltwalk, said: “It’s fantastic that Kevin is getting behind the Kiltwalk this year and we have a few more international celebrities up our sleeve who will be showing their support. We hope all Kevin’s fans, of which there are many, will sign up to make a difference for Scotland’s children.

Walkers can choose from a number of distances at each event, so everyone can take part.

Kiltwalk has raised £2.4 million since 2011 and charities who have benefited include the Yorkhill Children’s Unit at the new Queen Elizabeth Hospital in Glasgow.

You can sign up for the Kiltwalk at www.thekiltwalk.co.uk.