Media Release: Top ‘Down Under’ performer comes up north 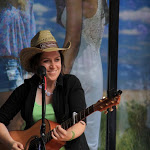 THE ‘home of King Creosote’ is due to host the first Scottish performance from one of Down Under’s best buskers.

Newly arrived from Australia, Jenny Biddle has five albums under her belt, the title of Melbourne’s Best Busker 2010-2012 and will be performing at Crail Folk Club next week.

“We are delighted to be one of, if not the first show in the UK since her arrival. An entertainer for sure, so a good night awaits.”

Jenny relocated to Scotland earlier this year and is working on material for her sixth album which will feature her 20 years of guitar experience including explorations of alternate tunings.

You can catch her at 8pm, on Thursday 10 March, at the Crail Folk Club in the Crail Town Hall.

Tickets at £7 are sold at the door on the night.

Jenny’s appearance is only one of many fine guest nights lined up by the folk club, with acts such as North Sea Gas, Tannahill Weavers, Mairearad Green & Anna Massie still to appear later this year.

Check out www.crailfolkclub.org.uk for details.

• Crail Folk Club is around 30 years old. It is held in Crail Town Hall (a historic listed building) usually on the second and fourth Thursdays of the month. We alternate singers nights with guest nights, with a capacity of between 20-75 on the various nights.

• We welcome seasoned musicians, beginners and those that just want to come along and listen in a friendly atmosphere. During Singers’ nights we feature local singers and musicians. Our music policy for guest nights is simple – it must be good quality, style of music doesn’t matter but it must entertain. All are welcome. If you don’t want to make music then just come along and tap your feet.

• The club usually meets in the historic Town Hall in the centre of Crail. Occasionally they may decant to the larger Crail Community Hall (100 yards from the Town Hall on the St Andrews Road). Unfortunately, these venues are not licensed, so you need to bring your own bottle and glasses.

MEDIA RELEASE issued by TMSA. You too can post media releases (aka press releases) on allmediascotland.com. Email here for more information.