Media Release: Rob Deering to pull his comedy strings at both ends of the M8 and over the bridge 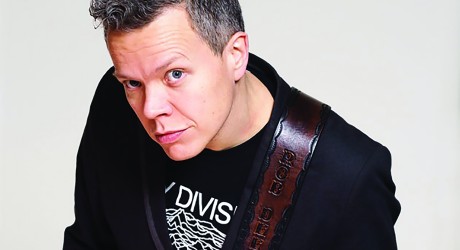 These stand-out, stand-up comedy gigs will be the perfect warm-up for audiences heading to That’s Fife Comedy Festival (April) and Glasgow International Comedy Festival (March) in the coming weeks.

Joining Rob Deering on the Carnegie Hall and Drygate Brewery stages will be Chris Forbes, the gangly and good-natured funny man and star of BBC’s hit series, Scot Squad, together with Micky Bartlett, one of Ireland’s brightest rising stars.

Micky will also be heading through to Edinburgh with Rob to perform at the Studio Theatre in Edinburgh.

Scott Agnew – “a terrific performer with funny bones who could make a shopping list entertaining” (Chortle) – will compere all three nights nights of mirth driven entertainment, keeping both comedians and audiences in check.

With his easy charm, cheesy singing voice, razor-sharp wit and clownish physicality, Rob Deering has established himself as a firm favourite on the nationwide comedy scene. Some even say that Rob Deering and his guitar are “the finest double act working in Britain today”.

* “Ingenious and hilarious.” The Guardian

Deering was the host and writer of three series of Out to Lunch, on BBC Radio 2.

He also hosted 99 Things to Do Before You Die on Channel 5.

He has always been an ardent quiz fan.

It all started aged 12, when his extrovert nature and love of a good quiz led to his first TV appearance, on the successful and well-known TVam game, Crack It.

His rubbish answers meant he failed to win the Sinclair ZX Spectrum for his school!. Since then, he has appeared on Channel 4’s Fifteen to One and won both a special edition of the Weakest Link and an edition of Celebrity Mastermind.

Chris Forbes is a critically-acclaimed Scottish stand-up comedian, actor and writer whose conversational, laid back and playful style gives him a likeable onstage persona.

His acting background (coupled with his 6’2” stature) helps him to command the stage. He may well take to ranting bitterly about the youth of today, the difficulties he faces in finding a comfortable pair of size 13 shoes and the pressures he faces to settle down, get married and have kids. Chris supported Kevin Bridges on his 2012 UK tour.

* “…the likeable and confident comic’s relatable and affable banter has the crowd onside from the get-go”. ThePublicReviews.com

Widely hailed as one of the funniest and fastest rising stars on the live stand-up circuit, Northern Irish comedian, Micky Bartlett (from BBC NI’s Monumental), will entertain the Dunfermline audience with his unabashed and hilarious observations of life, the world, and the people in it.

* “One of the most consistently funny people I’ve ever worked with… In years to come, people will be talking about the time they first saw Micky Bartlett.” Adam Hills

As compere for the evening, 6’5” Scott Agnew’s easy-going, laid back delivery and friendly approach to stand up will lull the Kingdom’s audience into a false sense of security before he spins yarns of general misadventure that will both shock and have them laughing uncontrollably.

* “Relaxed and adaptable, Scott Agnew is a consummately entertaining storyteller with a devilish eye for the absurd detail. Kind of a genius.” The List

Gilded Balloon Comedy at Drygate brings together the very best craft beer, fearless food for the soul and strong intelligent comedy with a quality blend of up and coming comedians and the finest established comics in an intimate comedy club. Pre- and post-show dinner offers (15 per cent off food with valid ticket) must be booked in advance.

The Gilded Balloon at The Studio at the Festival Theatre is a new comedy club for Edinburgh. It is staged in the exciting, intimate and flexible studio space, perfectly suited to stand up, and features a line-up of popular Scottish, UK and international comedy talent.

For further information on Gilded Balloon Comedy go to: http://www.gildedballoon.co.uk