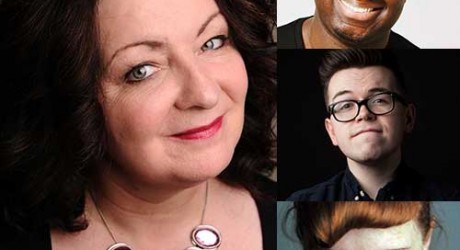 THE Gilded Balloon are stepping up their popular monthly comedy gigs at the Drygate Brewery for The Glasgow International Comedy Festival in March.

Mark Nelson, with his perfect mix of dark humour, cutting observations and superb one-liners, and Janey Godley, the brutally honest Scottish queen of comedy, will be headlining the two additional dates.

He will be joined by the bold, brash and fast-talking alpha-female, Abigoliah Schamaun, and Jim Smith, a Perthshire farmer, who is partial to the occasional sheep-based pun.

Glaswegian comic, Scott Gibson, who brilliantly mixes a conversational style with his own unique brand of dark humour, will keep both audience and comedians in check throughout the night. His ability to push boundaries and control any room he plays, has allowed him to move up the ranks quicker than many before him.

On Friday 18 March, Janey Godley, the no-nonsense, shoot-from-the-lip Glaswegian comic with her brilliantly-barbed and staunchly down-to-earth storytelling style, will take on the headline duties.

In support, will be the up and coming Glaswegian comedian, Christopher MacArthur-Boyd, and former Harrods porter-turned-Hackney gag merchant, Funmbi Onmotyo. As compere for the night, Lancashire comedienne, Katie Mulgrew, who really likes making people laugh, will make sure that everyone has a great time.

Mark Nelson, who originally hails from Dumfries, is not afraid of creating a stir.

His likeable, quietly-spoken and laid-back style belys the stronger content that can push the boundaries of taste and has audiences laughing at things they know they really shouldn’t be laughing at. Although his stand-up is certainly not for the easily-offended, the material is intelligent, well-conceived and cleverly crafted; all supported by a very confident and perfectly-paced delivery.

But they’re all true, uproarious and touching in equal measure. She has an incredible ability to pick and choose from a bottomless pit of brilliantly painted life stories, so vivid they are almost tangible, and skillfuly weaves them into every hilarious routine.

Wildly alive, fearless and blisteringly honest, Schamaun’s autobiographical style is often truly shocking, engaging and always delivered with deft timing. She appears to be the nice girl you’d take home to meet mother but possibly not leave alone with dad.

It’s town meets country as the Perthshire farmer, Jim Smith, hits Glasgow. Using a varied range of characters, regional accents and impressions with the occasional sheep-based pun, Jim tells tales of living and farming in rural Scotland and gives the audience an insight on how this north country boy sees the outside world. It’s no holds-barred with controversial views on many taboo subjects such as attending young farmer dances, tractor envy and the village hall beetle drive doping scandal of 1998.

Funmbi Omotayo’s friendly, instantly likeable style has already won him many awards in his relatively short stand-up career. With a sold-out Edinburgh Fringe show in 2015 and a stand out five-minute spot on The John Bishop Show, he is creating a huge storm on the circuit. Gently-paced, original and honest home-truths; tales of living in Hackney, his Nigerian roots and his hilarious day to day observations, are delivered warmly and confidently by this charming young comic.

It can be said that Chris MacArthur-Boyd is up-and-coming, in as much as it would be impossible for him to go downhill. He still lives at home with his mum and dad and is unemployed. However, he was a finalist in both the notorious So You Think You’re Funny? competition and the Scottish Comedian of The Year Awards in 2014.

Pre- and post-show dinner offers (15 per cent off food with valid ticket) must be booked in advance.