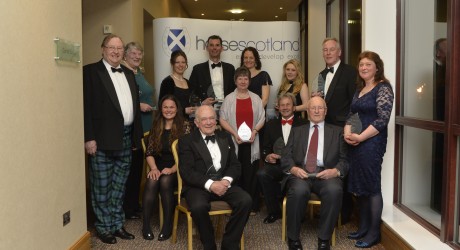 THE horsescotland annual awards recognise and reward the hard work of Scotland’s equestrian coaches, volunteers, performers, clubs, equine breeders, the equestrian business community, grooms, photographers and those who have made outstanding lifetime contributions to the equestrian community in Scotland.

Nominations were considered and, after much deliberation, our board scored the nominees against our criteria to decide the winners, with the Equestrian Photo of the Year being shortlisted by the board and voted for by the public via the horsescotland Facebook page.

This all led to very close competition as all nominees were fantastic.

The hugely deserving award-winners were announced at the sparkling ceremony held at the Westerwood Hotel & Golf Resort, Cumbernauld, on Friday 4 March:

Equestrian Business of the Year (sponsored by Tannoch Stables):

Equestrian Photo of the Year:

Groom of the Year:

Equine Breeder of the Year:

Club of the Year:

Volunteer of the Year:

Coach of the Year:

Performer of the Year:

During the evening, a special presentation was made to mark the phenomenal success of Scott Brash, a previous horsescotland performance squad member, gained in 2015.

Not only did Scott maintain his No.1 ranking, he was the first-ever winner of the Rolex Grand Slam of Showjumping: an amazing achievement.

Sadly, Scott was in Doha training and competing as part of his preparations to be selected onto the Team GB Olympic Team for the Rio Olympics; therefore, horsescotland board director, John White, and chair of British Showjumping Scottish branch, accepted the award on his behalf.

As well as the award from us, Scott will receive a fantastic painting by Canadian artist, Karen Chorley (www.hobbyhorsestudio.com), gifted to horsescotland to present to Scott to commemorate his win.

“The horsescotland awards 2016 were a fantastic opportunity for the equestrian community to come together and celebrate Scotland’s substantial equestrian success over the last 12 months.

“I would like to thank everyone who came along and made it a real night to remember and offer my sincere thanks to our sponsors Wades Print and our principal partner sportscotland – the national agency for sport, as well as the new EQY Magazine for providing a photographer.

“horsescotland will continue to drive forward a number of exciting programmes and initiatives in the year ahead and will work closely with its member bodies and key stakeholders to put in place a world-class system for Scottish equestrianism that ensures the welfare of the horse.”

“Much of the success of our riders, drivers and vaulters is down to the quality of the coaches and the commitment of the thousands of volunteers whose efforts are invaluable. The horsescotland awards create the perfect stage to recognise and reward the contribution of Scotland’s equestrian coaches, volunteers, performers, clubs, equine breeders and equestrian business community.”

All photos of awards winners, taken by Angus Blackburn of Scottish Field, can be found on the horsescotland Facebook page.

MEDIA RELEASE issued by horsescotland. You too can post media releases (aka press releases) on allmediascotland.com. Email here for more information.