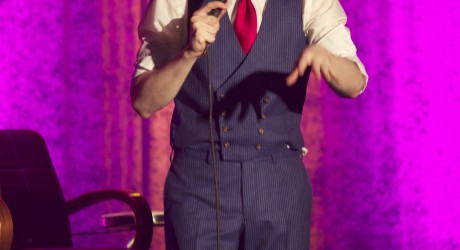 ONE of the rising stars of stand-up, Al Porter – a fun, showbizzy, chatty Irishman, full of irresistible vim -will headline Gilded Balloon Comedy at Drygate, Glasgow, on Friday 01 April 2016 and the Gilded Balloon Comedy Circuit at Carnegie Hall, Dunfermline, on Saturday 2 April 2016, guaranteeing audiences an evening of stand-out, stand-up and riotous, comedy carnage.

Stuart Mitchell, a first-class graduate of the school of self-deprecating Glaswegian comedians, and Andrea Hubert, the Londoner rich with extremely inventive sarcastic gags, will be joining Ireland’s golden boy of comedy on both the west and the east of the country.

Compere for both evenings will be Glasgow born and bred, Scott Gibson, who’s got oomph, energy and a rough-hewn likeability.

As one of Ireland’s most colourful stand-ups, Al Porter is a curious throwback to a time when comics wore suits, had ‘engagements’ rather than gigs, and received ‘notices’  rather than reviews.

Says a spokesperson: “A touch of Kenneth Williams can be seen in his dramatic reactions and exaggerated double-takes; with shades of Frankie Howerd in the pursed lips of fake outrage when we see an innuendo in his innocent words, or when an arched eyebrow becomes a punchline in itself.

“Charismatic, a tad filthy and very, very funny, Al Porter has a lock on old-school triple entendres, combining a sparkling high camp wit, reminiscent of light entertainment stars past, with a saucy and unflinchingly modern honesty.”

Al Porter’s enthusiasm for performing and affection for his audience is truly infectious.

In his playful and conversational style, described as council-estate camp, he delivers observational routines and acidic commentary with saucy and unflinchingly modern honesty; combining this with intimate anecdotes, moments of pure filth, as a lever directly into his life.

Stuart Mitchell, meanwhile, made his comedy circuit debut in 2009 and has very quickly become one of the most exciting talents performing on the UK circuit.

His sharp, one-liners, clever anecdotes, genuinely surprising call-backs, brilliant turn of phrase and clever wordplay made him a perfect choice to support Stewart Francis and Hal Cruttenden on their national tours. He also has a wince-inducing medical history that most comics would give their right arm for, even if he’s only missing a few finger tips. He is the only UK comedian to have performed at the World Comedy Series in Las Vegas.

Being a gangly 6ft 2in sets Andrea Hubert aside as an outsider, but not so much as her archly cynical attitude. She portrays herself as an awkward loser, eking out an existence in one of London’s less salubrious districts, but her slick, fluid set is rich with inventive, sarcastic gags all hung around an intriguing personality.

She started comedy in late 2009, and within 20 gigs gained second place in a number of national competitions. She’s since performed alongside some of the UK’s best comedians at prestigious comedy clubs all over the country, been commissioned as a writer for the BBC, and won the BAFTA Rocliffe New Writing Forum at the New York Television Festival in 2013, beating over 500 other entrants.

Scott Gibson, a storyteller at heart, mixes a conversational style with his own unique brand of dark humour confidently leading his audience down a path few dare to tread.

This ability to push boundaries and control any room he plays, has allowed him to move up the ranks quicker than many before him. His natural talent has also seen him being hand picked to support some of the UK’s top comedians – Frankie Boyle, Tom Stade, Des Clarke, Gary Little, Kevin Bridges and Daniel Sloss to name a few.