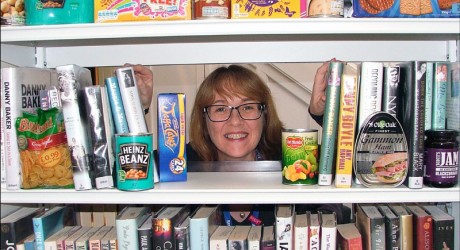 PEOPLE with overdue books will be given a fines amnesty if they make a foodbank donation at their local library.

The no-fines-for-food initiative – which runs until May 7 – was launched on Tuesday, April 12, by Renfrewshire Libraries, as part of their World Book Night celebrations.

It’s thought to be the only library service in Scotland offering the food-for-fines amnesty.

World Book Night is an annual event on Shakespeare’s birthday, April 23, and activities around the event are aimed at encouraging more people to read books.

Anyone with an overdue book can return it to any of the 12 libraries in Renfrewshire, as well as the mobile library, without any fine being incurred if they make a foodbank donation.

Normally, adults would pay 30p for every week their book is late being returned, up to a maximum of £2.40p.

Joyce McKellar, chief executive of Renfrewshire Leisure – the management trust that runs local libraries, said: “We wanted to do something a little bit different to celebrate World Book Night.

“There are three benefits to our fines for food initiative and that is we get more people coming back to our libraries returning books, which in turn encourages people to read more books and by collecting donations to Renfrewshire Foodbank we are doing something positive for the local community.

“Getting people and books back into our libraries for other people to read is more important than collecting fines.

“Some people may feel embarrassed about having overdue books and having to pay a fine, but this way they can do something good for the folks who are forced to use foodbanks and return their books with no penalty at the same time.

“Our libraries aren’t just about books – they’re about our communities as well.”