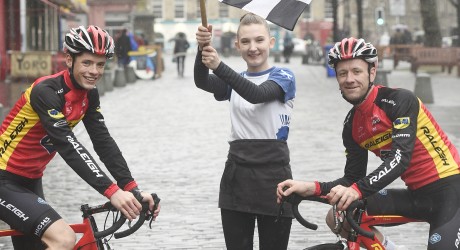 EDINBURGH’S city centre streets will be transformed into a cycling race track as Scotland welcomes round three of the Pearl Izumi Tour Series in May.

The fast-paced race – brought to Edinburgh on Thursday 19 May by Sweetspot, EventScotland and the City of Edinburgh Council – will see some of Britain’s top professional teams competing on a challenging course, which includes cobbles, hairpin bends and a tough sharp climb.

The Edinburgh race will take place on a new, 1.6-kilometre circuit, once again including the cobbled climb of Victoria Street as used in 2014, but this year turning left to take in the Lawnmarket and Johnston Terrace below Edinburgh Castle, before returning to the Grassmarket via West Port.

At least six teams of five riders will tear round the course for approximately 60 minutes and five laps, offering some close, tactical and very spectator friendly racing; with the team with the lowest cumulative time crowned the Edinburgh champions at the end of the evening.

In addition to the main race, Edinburgh will also host a corporate Pro-Am relay, sponsored by Brother UK.

The event will see ten teams of five riders, each joined by a professional cyclist, taking on the Edinburgh circuit from 18:00 in a battle of Scottish businesses and Tour Series partners.

Riders, James McCallum, Evan Oliphant and Fraser Martin, were joined by the City of Edinburgh Council’s cycling champion, Adam McVey, and local restaurant owner, Paul Duncan, to announce the route in the Grassmarket on Tuesday 12 April 2016.

Councillor Adam McVey said: “The Pearl Izumi is a fantastic opportunity for people to see Britain’s top cyclists go head to head against the stunning backdrop of Edinburgh’s Grassmarket.

“Cycling is going from strength to strength in the Capital so to play host to another major cycling event is great news. It proved to be a really popular event back in 2014 and I’m sure the Edinburgh public will be out in force to show their support for the riders.”

Paul Duncan, owner of Mama’s Pizzeria and El Toro Loco in the Grassmarket, said: “We are delighted to welcome the cycling event back to the Greater Grassmarket. The event in 2014 attracted thousands of families from across the country.

“The atmosphere was electric and what better way to encourage people to get on their bikes than having the elite guys showing us how it’s done racing around Edinburgh’s cobbled streets.

“The 2014 event had a great economic impact for us as a local independent business and we look forward to enjoying the buzz and benefit again on the 19 May.”

The Edinburgh event will also be extra special as the Brother Corporate Grand Prix, a Pro-Am relay, sponsored by Brother UK, will raise money in aid of former Tour Series champion, James McCallum’s Ride for Charlene, in memory of his late sister.

2011 champion, McCallum, who was among the riders on the Series’ last visit to Edinburgh, will be aiming to break Mark Beaumont’s non-stop, 500-mile ride around the coast of Scotland this June to raise money for Thrombosis UK.

James McCallum said: “Edinburgh is one of the most beautiful cities you can race your bike in so it’s a real privilege to have an event here; it’s really something quite special.

“It’s one of these courses that has a bit of everything, a cobbled climb, a descent, so you’ve really got to look after yourself and not go into the red too soon, or you’ll never come back out of it.

“The changes they have made to the course this year are great and will make the race even more competitive. It’ll be a better race to race, and an even better race to watch.”

Paul Bush OBE, VisitScotland’s director of events, said: “I am delighted that the Pearl Izumi Tour Series is set to visit Edinburgh and Motherwell in 2016, which will allow spectators to witness some of the world’s finest cyclists first-hand and right on their doorsteps.

“Events such as this not only inspire people to become more active but also broadcast terrific imagery of Scotland to audiences internationally, reinforcing the county’s reputation as the perfect stage for both participation and spectator cycling events.”

It is the first time since the Pearl Izumi Tour Series was created in 2009 that Scotland has held two rounds of the unique, team based series and the second time that both Motherwell and Edinburgh have hosted rounds.

Motherwell will begin the week on Tuesday 17 May hosting the opening round of the women’s series, plus a men’s race on the same 1.2-kilometre Hamilton Road circuit as in 2015, before Edinburgh returns to the Pearl Izumi Tour Series on Thursday 19 May with an event based around the Grassmarket and Edinburgh Castle.

Six men’s teams will compete in every round of the Pearl Izumi Tour Series, being joined at selected rounds by guest teams. They are led by defending champions, Madison Genesis, alongside JLT Condor presented by Mavic, NFTO, Pedal Heaven, Team Raleigh GAC and Team WIGGINS.

Highlights of both Motherwell and Edinburgh events will be shown on ITV4 on the evenings of Wednesday 18 and Friday 19 May respectively and available via catch-up services with the ITV Player.

Media contacts for Edinburgh round of Pearl Izumi Tour Series:

For downloadable images of cyclists, James McCallum, Evan Oliphant and Fraser Martin, who were joined by the City of Edinburgh Council’s cycling champion, Adam McVey, to announce the iconic Edinburgh route – go to https://www.dropbox.com/sh/ew83rajg487rwc8/AAD4HSf2iG2NDIOL9nBayguja?dl=0

For further press information, logos and images, or to arrange an interview, please contact:

Media accreditation is now open for all rounds. To apply please visit www.thetour.co.uk/press and follow the links for Media Accreditation.

Round Three Thursday 19 May      Edinburgh

Round Four   Thursday 26 May      Redditch (includes women’s round)

About The Pearl Izumi Tour Series

2016 will be the eighth season of the Pearl Izumi Tour Series, an unique team-based, televised city centre cycling series organised by SweetSpot Group Ltd, the company behind the organisation and promotion of the Tour of Britain and the Women’s Tour. The Pearl Izumi Tour Series brings together the very best in British professional teams and male and female riders, competing on town and city-centre circuits in front of packed crowds as a part of a full day of cycling activities.

SweetSpot is a sports marketing and events company specialising in the creation and execution of high quality, commercially successful, annual sporting events.

EventScotland is working to make Scotland the perfect stage for events. By developing an exciting portfolio of sporting and cultural events EventScotland is helping to raise Scotland’s international profile and boost the economy by attracting more visitors. For further information about EventScotland, its funding programmes and latest event news visit www.EventScotland.org Follow EventScotland on Twitter @EventScotNews.

EventScotland is a team within VisitScotland’s Events Directorate, the national tourism organisation which markets Scotland as a tourism destination across the world, gives support to the tourism industry and brings sustainable tourism growth to Scotland. For more information about VisitScotland see www.visitscotland.org or for consumer information on Scotland as a visitor destination see www.visitscotland.com