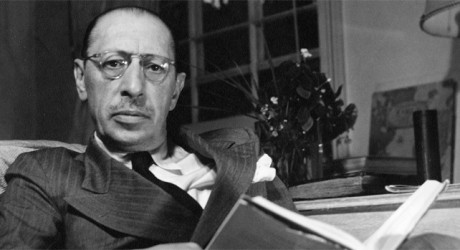 Learn about, listen to and join in with Stravinsky and the RSNO this spring

FROM Sunday 24 April to Saturday 7 May, the Royal Scottish National Orchestra (RSNO) will be under the influence of one of 20th century’s most thrilling and era-defining composers, Igor Fyodorovich Stravinsky.

The composer receives special attention over a two-week celebration showcasing some of his greatest works.

Principal guest conductor, Thomas Søndergård, leads the orchestra for the exploratory presentation Under the Skin of Stravinsky at the RSNO’s New Auditorium and explores two distinct aspects to this selcouth composer in concert, focusing on three of his neo-classical works as well as his explosive and highly-influential ballet music, The Rite of Spring.

Friday 29 April at the Usher Hall, Edinburgh and at the Glasgow Royal Concert Hall on Saturday 30 April sees Stravinsky’s Symphony in C, when principal guest conductor, Thomas Søndergård, juxtaposes two of Schubert’s early symphonies (symphonies Three and Four) with Stravinsky’s first major composition since his emigration to the United States, Symphony in Three Movements and the Symphony in C, written just prior to his leaving Europe.

Under The Skin Of…returns to the New Auditorium at the Glasgow Royal Concert Hall on Tuesday 3 May (7.30pm) to consider the life and achievements of Stravinsky, with particular focus on The Rite of Spring, performed by full symphony orchestra, led by RSNO principal guest conductor, Thomas Søndergård, and presented by broadcaster, Sandy Burnett.

The Stravinsky Project comes to a close with performances of Stravinsky’s ballet work The Rite of Spring (Friday 6 May, Usher Hall, Edinburgh; Saturday 7 May, Glasgow Royal Concert Hall).

Complementing the complete ballet music will be a performance of the composer’s neo-classical Violin Concerto, featuring Spanish soloist, Letitia Moreno, (replacing an indisposed Stefan Jackiw) who makes her RSNO début.

Prior to The Stravinsky Project concerts the Orchestra invites amateur musicians to join it for rehearsals and an informal performance at the New Auditorium, Glasgow Royal Concert Hall.

Participants will rehearse with RSNO musicians from 10.00am until 4.00pm with a public performance from 6.00pm that evening.

The all-Stravinsky programme includes excerpts from The Firebird Suite (1919) and Circus Polka, and the ensemble will be led by RSNO associate conductor, Jean-Claude Picard.

There is a Grade Seven suggested minimum requirement for participants. To find out more, please call the Learning and Engagement Team on 0141 225 3553. Attending the concert as an audience member is free but should be booked in advance by calling 0141 353 8000.