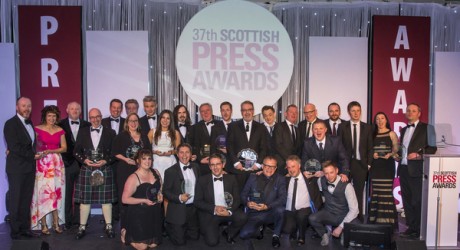 THE Daily Record was last night (April 21, 2016) crowned Scotland’s Newspaper of the Year for 2016 at the 37th annual Scottish Press Awards.

They won Campaign of the Year for the ‘Refugee Crisis and The War on Terror’ hashtag, We Have Room. With all these awards, it’s no surprise that The Daily Record was awarded Newspaper of the Year for 2016.

Commenting on the Daily Record’s Newspaper of the Year win, chair of the judges, Austin Lafferty, said: “A year after the referendum, the Daily Record is engaged by the power brokers, has a mass readership and looks after emerging talent in the industry.

“The Daily Record has survived the decline of the Labour party without falling, and is transcending the Scottish political landscape as well as building an aggressive new media strategy, keen to embrace our digital future.”

The awards are organised by the Scottish Newspaper Society (SNS).

SNS director, John McLellan, said: “As always, the awards demonstrate the excellence of the journalism on display every day in Scotland, confirming the role of Scottish newspapers as key agenda-setters, opinion-formers and news-breakers with the powerful combination of print, online and mobile delivery. All our finalists tonight are worthy of heart-felt congratulations.”

Mark Macaskill from The Sunday Times had a successful night, winning both Journalist of the Year and Reporter of the Year.

The Weekly Newspaper of the Year was awarded to The Fife Free Press and Innovation of the Year went to The Evening Telegraph Dundee for its ‘Merry Christmas Loyal Customer’ idea. It was widely shared on social media and described as a fantastic, feel-good and compelling.

The Front Page of the Year was awarded to The Edinburgh Evening News for its ‘Mince’ headline, a single word which made a big impact after being recorded in a council meeting. The fascinating story and great accompanying image gained the page great success.

The Scoop of the Year was awarded to The Sunday Mail for The Forgotten Suspect by Jim Wilson and Brendan McGinty. The story focused on bringing attention murdered Glasgow prostitute Emma Cauldwell, and how she may have been denied justice due to lack of police attention.

Journalism Team of the Year was awarded to The Scottish Sun for their coverage of the M9 Police Call Centre Scandal, during which Stirling police took three days to respond to a fatal crash.

The Lifetime Achievement Award was presented to Bruce Waddell, former editor of the Daily Record, as a celebration of his career in Scottish newspapers.