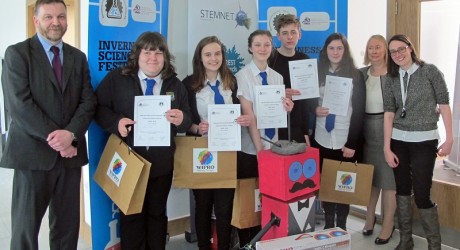 TEAMS of pupils from Alness Academy and Portree High School have been named as joint winners of the University of the Highlands and Islands robot competition.

Launched in December, the challenge invited teams of S2 and S3 pupils to develop a pitch explaining why their school should win a robot.

Of the teams which entered, Portree High School and Alness Academy were judged to have the most creative and convincing pitches, with a team from Kingussie High School a close second. Thomas Prentice, Michael Macqueen, Callum Shaw, Mara Stewart, Sarah Gillies and Shadri Nel from Portree entered a video pitch which explained how the robot could benefit pupils with mobility and learning challenges.

The Alness team – made up of Meagan Weatherall, Eilidh Forsyth, Jade Crosbie, Euan Sutherland and Shonagh Reece – used interlinking video clips in their presentation. Kayla McKay, Taylor Mitchell, Jake Bell and John McCabe from Kingussie explained how they would work with their maths, science and technology department to embed robotics in the schools’ general education and share what they learn with other schools.

The pupils from Portree and Alness won a four-foot Meccano Meccanoid robot which can speak, move, record sounds, respond to voice commands and connect to smart devices, while the Kingussie team won a range of tech prizes for their school, including robotic arms and kits to make computers.

The pupils delivered their pitches to a panel of judges at a special event at the start of Inverness Science Festival. The week-long festival, which takes place until Saturday 7 May, offers a range of free events around the city.

The schools robot competition was organised by the University of the Highlands and Islands’ science, technology, engineering and maths (STEM) team.

STEM administrator, Dr Evelyn Gray, said: “This was a really exciting initiative to be involved with. I was amazed by the standard of the submissions and the amount of effort and knowledge the pupils demonstrated.

“I hope the competition encourages them to continue to take an interest in science. I’m already looking forward to our next schools’ competition!”

Eilidh Forsyth, a member of the Alness team, said: “Being able to watch the other schools presentations and seeing their different takes on the competition was extremely interesting and enjoyable and we would wish to thank all the judges, hosts and all involved in making the event a success.”

Lenka Nagle, faculty head for mathematics and numeracy, computing and business management at Kingussie High School, said: “The competition was a fantastic experience for our S2/3 students.

“They all thoroughly enjoyed themselves. Not only did it encourage them to learn more about robots and think about the past and future, it also gave them a chance to think beyond the confines of their own classroom, work as a team and improve their presentation skills.

“They were able to talk with senior teachers, seek help from professionals outside the school environment and have a taste of university life.”