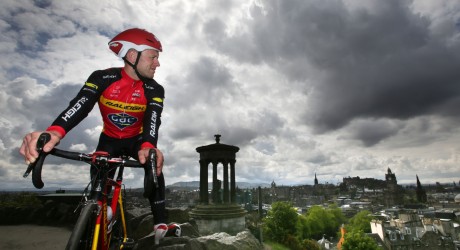 THOUSANDS of enthusiastic cycling fans will line the iconic streets of Edinburgh’s Old Town on Thursday May 19 2016 – when round three of The Pearl Izumi Tour Series, recognised as the UK’s leading city centre team cycle race series, is staged in the capital.

The main race will start at 19.30 with support races and an open hill climb time trial starting at 16.00. All races are free to spectate.

Spectators will be looking to get the best vantage points as six of the UK’s top professional cycling teams (of five riders each) race around a challenging closed-road circuit in the heart of the capital.

The teams, who include defending Champions Madison Genesis, JLT Condor presented by Mavic, NFTO, Pedal Heaven, Team Raleigh GAC and Team WIGGINS, will travel to Edinburgh fresh from racing in Motherwell, home to round two of the series on Tuesday May 17.

It the first time the unique team based televised event has held a pair of rounds in Scotland.

Jon Mould, the Motherwell race winner and member of the leading team JLT Condor presented by Mavic, said: “I’m really looking forward to Edinburgh, it’s the best round of the series with the best crowds, so it’s my favourite one.

“It’s looking really good for the team so I think it should be a good round for us.

“We’ve got another strong team so we’ll go into the race quite hard and get stuck in.”

Evan Elephant, from Team Raleigh GAC (who are lying third in the overall team classification after round two in Motherwell), and who is from Tranent in East Lothian, said: “It’s fantastic to have the opportunity to have a top race on my doorstep and I’m looking forward to getting stuck in in front of friends and family.”

Edinburgh’s fast, furious and tactical race will be staged on a new and extremely challenging 1.6-kilometre circuit that includes cobbles, a gruelling hill climb and hairpin bends

The 500-metre cobbled climb up Victoria Street, which was used when the series last came to the city in 2014, will again form the centre piece of the race.

In 2016, the riders will turn left at the top of the street to take in the Lawnmarket and a fast downhill section on Johnston Terrace below Edinburgh Castle, before returning to the Grassmarket via West Port.

Mick Bennett, The Pearl Izumi Tour Series race director, said: “The new Edinburgh circuit is going to make the racing even better, for the riders and for spectators.

“We’ve retained the spectacular Victoria Street climb, which for me is one of the most iconic locations in the Tour Series, and now will also be racing in the shadow of the famous castle. It’s a hard circuit and will make for a great race.”

The teams will tear round the circuit for a lung busting and energy sapping 60 minutes and five laps, offering some close, tactical and very spectator friendly racing.

The overall winner and the team with the lowest cumulative times will be crowned the Edinburgh Champions at a podium ceremony immediately following the end of the race.

Series leaders, both team and individual will also be announced.

Jack Pullar from the Pedal Heaven team, a former British National Hill Climb Champion who represented Scotland at the 2014 Commonwealth Games, said: “Edinburgh is my favourite city in the whole of the UK. I’ve had a lot of good memories there, so it’s going to be a special race for me.

“I think with the new course it’s going to be even better than last time, because you take in even more of the sights, like the Castle. We were third team In Motherwell and we’re moving back-up, so I think it’s upwards from here. As a team we should suit Edinburgh, so we’re targeting a good result.”

Edinburgh’s Festival and Events Champion, Councillor Richard Lewis, said: “Winding through the hilly, cobbled streets of the Grassmarket in full view of Edinburgh Castle, this has to be one of the most visually stunning legs of the Pearl Izumi series.

“Make sure you get there early to secure the best view and to cheer on the riders as they go head-to-head.

“Cycling really is on the rise in the Capital with more than 16.5 million cycle trips now being made annually in the city. As a compact, densely populated and beautiful city, Edinburgh is suited perfectly to travel by bike and high profile events like the Pearl Izumi help to promote cycling and sport in the city.”

The free-to-attend, action-packed event, centred around the Grassmarket, Edinburgh Castle and West Bow, is brought to Edinburgh by Sweetspot, EventScotland and the City of Edinburgh Council.

Paul Bush OBE, VisitScotland’s director of events, said: “We are delighted to support Tour Series in 2016 and are excited about the prospect of seeing some of the UK’s finest talent battling it out through the streets of Edinburgh following a highly-successful Motherwell stage yesterday.

“The number of cyclists in the capital and across the country is on the rise and events, such as Tour Series, have an important part to play in this, encouraging people to participate in a sport that is not only terrific fun but also provides a great means of transport.”

In addition to the main race, Edinburgh will also host a corporate Pro-Am relay, sponsored by Brother UK, and other support events including an open hill climb up Victoria Street and an amateur club race that will give aspiring local club riders the chance to race on the same course as the pro-teams.

The support events begin with the The Grassmarket Scramble at 16.00 with the main event of the evening being staged at 19.30.

There will be a small promo event village in the Grassmarket with leading cycle brands, cycling organisations and cycling events exhibiting.

Highlights of the Edinburgh event will be shown on ITV4 on the evening of Friday May 20 and will be available via catch-up services with the ITV Player.

Media contacts for Edinburgh round of Pearl Izumi Tour Series:

For further press information, logos and images, or to arrange an interview, please contact:

All events will be based at Edinburgh’s Grassmarket.

A downloadable circuit map of the can be viewed here: http://thetour.co.uk/files/documents/TS2016_RaceManual_Edinburgh_v1.pdf

18.00 – The Brother Corporate Grand Prix – A corporate Pro-Am relay where ten teams of five riders, each joined by a professional cyclist, take on the Edinburgh circuit in a battle of Scottish businesses and Tour Series partners

For media accreditation please log on to www.thetour.co.uk/press and follow the links for Media Accreditation. If you need further information about the accreditation process or if you won’t have a named reporter / photographer until the event you can contact:

Round One Thursday 12 May Ramsey, Isle of Man

Round Two Tuesday 17 May Motherwell (includes women’s round)

Round Three Thursday 19 May Edinburgh

Round Four Thursday 26 May Redditch (includes women’s round)

Round Five Friday 27 May Aberystwyth

Round Six Tuesday 31 May Durham

About The Pearl Izumi Tour Series:

2016 will be the eighth season of the Pearl Izumi Tour Series, an unique team based, televised city centre cycling series organised by SweetSpot Group Ltd, the company behind the organisation and promotion of the Tour of Britain and the Women’s Tour.

The Pearl Izumi Tour Series brings together the very best in British professional teams and male and female riders, competing on town and citycentre circuits in front of packed crowds as a part of a full day of cycling activities.

SweetSpot is a sports marketing and events company specialising in the creation and execution of high-quality, commercially-successful, annual sporting events. www.sweetspotgroup.co.uk

EventScotland is working to make Scotland the perfect stage for events. By developing an exciting portfolio of sporting and cultural events EventScotland is helping to raise Scotland’s international profile and boost the economy by attracting more visitors. For further information about EventScotland, its funding programmes and latest event news visit www.EventScotland.org. Follow EventScotland on Twitter @EventScotNews.

EventScotland is a team within VisitScotland’s Events Directorate, the national tourism organisation which markets Scotland as a tourism destination across the world, gives support to the tourism industry and brings sustainable tourism growth to Scotland. For more information about VisitScotland, see www.visitscotland.org or for consumer information on Scotland as a visitor destination see www.visitscotland.com.