Media Release: Loretta Maine to spread her jaded-fairy magic on Glasgow and Fife 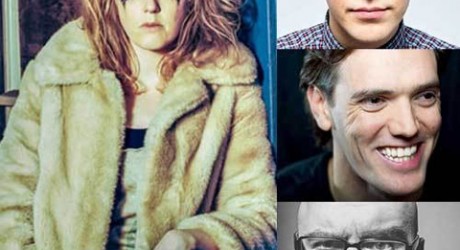 THE tousled-haired mascara-smudged, bunny-boiling American singer-songwriter, Loretta Maine, will spread her jaded-fairy magic on Glasgow via the medium of music when she headlines Gilded Balloon Comedy at Drygate on Friday 3 June 2016 and Gilded Balloon’s Fife Comedy Circuit at Carnegie Hall on Saturday 4 June 2016.

The screeching, neurotic entertainer, who spews out her vitriol any which way, has songs to sing, tales to tell and pain to unleash.

On witnessing this hilarious train-wreck, with song titles that include Happy Goddamn Christmas and White Wine Witch, Loretta’s Glasgow and Dunfermline audiences will find it hard to resist her psychotic and needy charms.

The monstrous songstress is the creation of Pippa Evans, an award-winning comedian, actress, songwriter and improviser. Her alter ego, whose angst tips into murderous resentment, supplies amusingly-barbed remarks on the music industry and neurotic young womanhood.

Chris Forbes, the critically-acclaimed Scottish stand-up comedian, actor and writer, will join Loretta Main at the Drygate Brewery and Carnegie Hall. Compere on both nights will be Glasgow-born and bred Scott Gibson, who’s got oomph, energy and a rough-hewn likeability.

Pippa has taken four critically-acclaimed solo shows to the Edinburgh Festival Fringe and bagged a Best Newcomer nomination for her debut hour, Pippa Evans and Other Lonely People.

Pippa is a semi-regular writer and performer on BBC Radio 4’s The Now Show, she is a core member of Showstopper: The Improvised Musical and for BBC Radio 4 Extra’s Newsjack. Pippa also co-created the international phenomenon, The Sunday Assembly, and has performed across all three series of BBC3’s Live At The Electric.

Scott Gibson is a storyteller at heart. He mixes a conversational style with his own unique brand of dark humour, confidently leading his audience down a path few dare to tread. This ability to push boundaries and control any room he plays has found Scott in high demand on the UK circuit. He has supported some of the UK’s top comedians – Frankie Boyle, Tom Stade, Des Clarke, Gary Little, Kevin Bridges and Daniel.

Chris Forbes is a critically-acclaimed Scottish stand-up comedian, actor and writer, whose conversational, laid-back and playful style gives him a likeable onstage persona.

His acting background (coupled with his 6’2” stature) helps him to command the stage.

He may well take to ranting bitterly about the youth of today, the difficulties he faces in finding a comfortable pair of size 13 shoes and the pressures he faces to settle down, get married and have kids. Chris supported Kevin Bridges on his 2012 UK tour. He is a star of BBC 2’s sketch show, How Do I get up There?’ and BBC Scotland’s hit Comedy, ‘Scot Squad’.