Media Release: There was a Big Bang @ Ayrshire College! 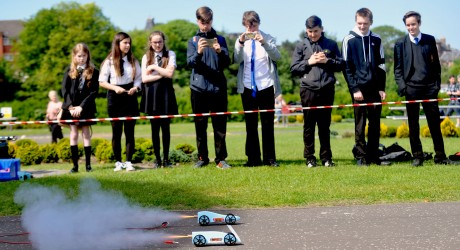 QUEEN Margaret Academy pupils were crowned champions of the BBC micro:bit model rocket car competition at Ayrshire College, after a series of high-speed races took place at its Ayr campus.

The competition is organised by the Bloodhound project and was part of the Big Bang @ Ayrshire College event, which aimed to get Ayrshire pupils excited about science, technology, engineering and maths (STEM).

There is little doubt that the event has sparked an interest in many of the pupils who took part, after they watched their specially designed cars reach top speeds of 48mph during the explosive races.

Under the supervision of the British Army and Ayrshire College engineering lecturer, William Morton, rocket cars raced against each other in a straight line to establish which pupils had engineered the quickest model.

That speed was blown out of the water in the afternoon session though, when Queen Margaret Academy pupils saw their rocket blast off at an unbelievable speed of 47.59mph.

They were up against teams from Ayr Academy, Belmont Academy, Kyle Academy and Prestwick Academy.

While their cars were not racing outside Ayr’s Riverside Building, pupils were keen to visit the stalls set up by the British Army, Royal Aeronautical Society, Royal Air Force and United Technologies inside the college.

Ayrshire College also invited the pupils to hear about the range of STEM courses that they offer, including the Foundation Apprenticeship programme.

Foundation Apprenticeships provide S5 pupils with the opportunity to learn both at college and in the workplace to achieve an industry recognised vocational qualification alongside their other school subjects.

Loraine Johnston, curriculum manager for Business & IT, said: “This is a good way of promoting STEM to school pupils in an interesting format. It has been fun, interesting, and it ties in with their subjects. All the pupils enjoyed it, so hopefully it will encourage them to do more. It’s also introduced them to the BBC micro:bit, which will be distributed free to schools after the summer holidays.”

Eleanor Walker, physics teacher at Queen Margaret Academy, said: “It was a really enjoyable day racing the cars and it’s a great way to inspire the pupils into STEM areas.

“They thoroughly enjoyed taking part in the competition. They’ve absolutely taken a lot out of this experience: they knew they had to make the car as light and as aerodynamic as possible, so it’s great that they’ve been announced as the winning team!”