Media Release: The return of ‘the yellow submarine’ 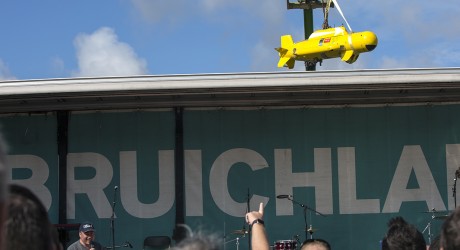 A YELLOW submarine raised £3,000 for the Islay and Jura Sick Children’s Fund, during Feis Ile – ‘The Islay Festival of Malt and Music’ 2016.

Ten years ago, Port Ellen fisherman, John Baker, had found the iconic submersible, floating just below the surface of the sea, while steaming home to land his catch.

He had put a line round it, towed it in, and called the Ministry of Defence to tell them of his find.

Its recovery became a cause celebre in the newspapers, with appeals going out asking: ‘Has anybody lost a yellow submarine?’

The answer was, of course, ‘Yes’ – and eventually the minesweeper, HMS Blyth arrived, at dawn, to collect their submersible, which had been held in a Port Ellen garden for safekeeping.

It was quite a tourist attraction for a while.

Islay distillery, Bruichladdich, who are never slow to spot a story, immediately released a special bottling of single malt whisky to commemorate the event – and even presented the captain of HMS Blyth with a case, as a goodwill gesture.

That original release of whisky was a very desirable 14 year-old, and it was to become highly-collectable over the next few years.

All of which was interesting, and great fun, but the tale would surely have slowly drifted off into the sunset had it not been for a sharp-eyed resident of Bruichladdich.

Islay man, John Gamble, spotted that the passage of time had meant that ‘the yellow submarine’ was now obsolete – and surplus to Royal Navy requirements.

It was being offered for sale from a Devonport dockyard on the online auction site, eBay.

Naturally, Bruichladdich Distillery stepped in and bought it. It would have been rude not to.

Following some restoration, at Portnahaven boatyard on Islay, the iconic vessel was winched high above the cheering crowds during the distillery’s annual open day.

Miraculously, some of the original spirit, now 25 years-old, was still maturing in a warehouse.

There was enough to allow two, new bottles (now filled with 25 year-old), to be auctioned, with some left over to be shared among the crowd.

An important Islay children’s charity has had a welcome boost to its funds as a result – and a lot of people have enjoyed a very fine dram.

Definitely a good news story – and one with a happy ending because ‘the yellow submarine’ will now be mounted on a plinth outside the distillery – welcoming visitors to Bruichladdich for many years to come.

MEDIA RELEASE issued by Bruichladdich Distillery. You too can share your stories (aka press or media releases), on allmediascotland.com. Email here for more information.