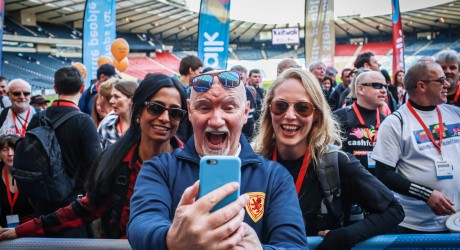 THE Royal Bank of Scotland Kiltwalk has revealed that every penny, of the £402,000 raised so far by 4,000 fundraisers at its Glasgow event on April 24th, has already been distributed to children’s charities in Scotland.

And following a successful event in Aberdeen on June 5th, that total will top £500,000 by the end of this month.

Kilt walk backer, Sir Tom Hunter, said: “When we relaunched Kiltwalk late last year, with the financial support from the Hunter Foundation, Royal Bank of Scotland, Arnold Clark and the STV Children’s Appeal we  guaranteed that 100 per cent of the money raised by participants would go straight to children’s charities in Scotland – and that’s exactly what we’ve done.

“We were determined that the money should be handed over as quickly as possible and we hope it will make a fantastic difference to the lives of children here in Scotland; Kiltwalkers should be rightly proud of the difference they are making.”

Among the charities which have already received funds so far are:

Calum’s Cabin, a holiday retreat on the Isle of Bute for children suffering from cancer and cancer-related diseases, has received funding of more than £52,000. This will give many more families the opportunity to spend quality family time together, making irreplaceable memories.

Calum’s mum, Caroline Spears, from Calum’s Cabin, said: “The funds will help so many more families come to the cabin, cottage and Mount Stuart in their time of need.

“We are enormously grateful to those taking part in this year’s Kiltwalks. They should be really proud of what they have achieved and know the difference it will make to so many families.”

Royal Bank of Scotland Kiltwalk chief executive, Paul Cooney, revealed that over £86,000 has already been pledged from the Aberdeen Kiltwalk on June 5th and, with further events on Speyside (August 14th) and Edinburgh (September 18th), the money being donated to good causes in Scotland is set to increase even further.

He said: “The response from people all over Scotland has been phenomenal. There was a real carnival atmosphere in both Glasgow and Aberdeen and we’re still seeing numbers increasing for the forthcoming Kiltwalks in Edinburgh and Speyside.

“As we’ve done in Glasgow and Aberdeen, as soon as the money comes in we’ll be distributing it to a variety of local and national children’s charities.”

There’s still time to sign up for the Edinburgh and Speyside events at www.thekiltwalk.co.uk.