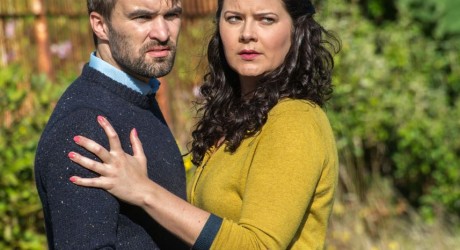 A NEW series of episodes of the popular BBC ALBA drama, Bannan, has been commissioned, it has been announced.

The filming of a further five episodes of the programme will give a significant boost to the creative industries in Scotland.

Funded by MG ALBA – the Gaelic Media Service – Bannan is filmed on the Isle of Skye and is produced by The Inbetweeners’ Chris Young and directed by Tony Kearney.

To date, 18 episodes have been filmed and the drama has proved to be one of the most watched programmes on BBC ALBA.

Announcing the new episodes at a preview screening at the Edinburgh Film Festival yesterday (Sunday), Chris Young said: “As we host the premiere of the latest series of Bannan at the Edinburgh International Film Festival, there is no better way to celebrate the show’s continuing success than with this tremendous news.

“With these new episodes, Bannan will be heading in an exciting new direction. Shooting starts in August so watch this space.”

As well as the new Bannan episodes, MG ALBA said today its vision remains to ‘build on the success of the channel’.

“We continue to work on increasing our already significant impact on the independent production sector in Scotland, as we increase our expenditure on the sector and help create a culture of ambition and aspiration in our creative community and nowhere is this most evident than in our commitment to Bannan.”

She said: “Our audience is over-reliant on repeat material and this is the most serious deficit in our service on BBC ALBA.

“In our discussions with the UK Government and with the BBC, we have made clear that an increased level of content is essential in service development and it is vital that elements of our content are a ‘must watch’ for the younger Gaelic demographic. We need a greater number of original programmes and a wider variety of content.

“This is an ideal time to invest in BBC ALBA, with the renewal of the BBC’s Charter at the end of this year.

“We have made strong representation to both the BBC and the UK Government over the past year. We believe that the BBC must make the same core commitment to BBC ALBA as it has done to S4C in Wales for the past 30 years, that is, a minimum of ten hours per week of original BBC programming. For BBC ALBA, that means a commitment of an additional five hours per week.”

Donald Campbell, chief executive of MG ALBA, said: “In 2015-16 we made a significant investment in high quality new or original Gaelic production, with a spend of £9.9m generating 454 hours from 26 different production companies.

“Of that, £8.6m was spent with the independent production sector. An economic impact report confirmed that almost 300 jobs result from MG ALBA’s activities, 40 per cent of which are based in the Highlands and Islands.

“Over the last year, the channel has maintained a very strong performance. It is continually evident that the greatest demand is for new or original programmes.

“With only 13.3 hours of first-run programmes on average each week – a repeat ratio of 74 per cent – it was significant that the core audience increased their average weekly viewing time from 4.4 to 4.8 hours and the national audience from 1.7 to 1.8 weekly hours.

“BBC ALBA was not exempt from the wider trends affecting linear television viewership, with average weekly reach in Scotland falling slightly to 15 per cent, still well ahead of the benchmark expectation of ten per cent.

“Online viewing of our Gaelic media content continued to face the double challenge of discoverability on a densely populated iPlayer and poor broadband provision in many areas of core viewership.

“Many Gaelic-speaking communities still do not enjoy the necessary bandwidth or reliability required for the streaming of audio-visual content on the iPlayer.”

A copy of the annual report is available to download here.

A copy of the Bannan press kit, with character and production information, is available to download here.