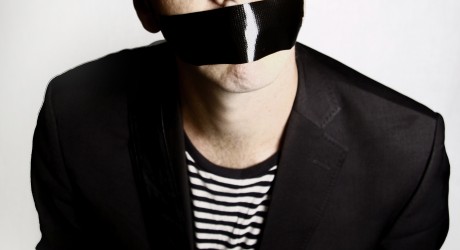 SILENCE will be golden for comedy audiences in Dunfermline, Glasgow and Edinburgh at the end of June.

The Boy With Tape on His Face, aka Sam Wills, the multi-award-winning ‘Chaplinesque New Zealand prop comic’, will headline Gilded Balloon Comedy nights at Carnegie Hall, Dunfermline (Thursday 30 June), Drygate, Glasgow (Friday 01 July) and The Studio at The Festival Theatre, Edinburgh (Saturday 2 July 2016); as he road tests some new material before embarking on a UK tour in September.

The Boy With Tape On His Face is a personality with universal appeal: big-hearted, innocent fun featuring a stripy-topped, spiky-haired character, a strip of duct tape and a bag of cheap props.

His shows, a happy combination of old-school mime routines – mime with noise, stand-up with no talking; drama with no acting – a healthy dose of audience participation and the exasperated facial expressions of a speechless man, transcend the barriers of language, culture and accessibility and are the perfect playtime for adults.

In the past, ‘The Boy’ has transformed oven gloves into lovers and tape-measures into light sabers. Duels have been fought with staple guns and balloons. What new magical moments does this comedy genius have in store for Glasgow and Edinburgh to bring out that inner child in us all?

‘Utterly spectacular! Hysterically funny – fight for a ticket!’ (Time Out).

The effervescent Australian comic Bec Hill, who has a talent for incorporating arts and crafts into her stand-up routines, and Edinburgh-based Aberdonian exile, Robin Grainger, will join The Boy With Tape on His Face on stage in Dunfermline, Glasgow and Edinburgh.

Compering all evenings will be Scotland’s rapidly-ascending Glasgow comic, Ray Bradshaw, considered one of the funniest and most exciting acts on the UK comedy scene.

International girl of naïveté, Bec Hill, invites her audience into her world of wonderment, curiosity and pure joy. With a refreshing blend of charm, whimsy and enthusiasm, her cynicism-proof brand of comedy and impressive lo-fi animation is highly individual, perfectly reflecting her effervescent personality.

Robin Grainger is an award-nominated stand-up comedian whose anecdotes have appeared on the podcast, The Good, The Bad and The Ugly. Observations about family, relationships and the human condition will help shine some light on his transformation from shy teenager to ‘confident man who commands the stage’. Robin has also supported Tom Stade on two national tours.

Keeping the comedy acts on their toes and the audience in check will be Scotland’s Ray Bradshaw. The jovial and friendly people’s comedian has an unmistakable talent for the left field and the joke with a sting in it’s tail.

For further information on Gilded Balloon Comedy, go to: http://www.gildedballoon.co.uk