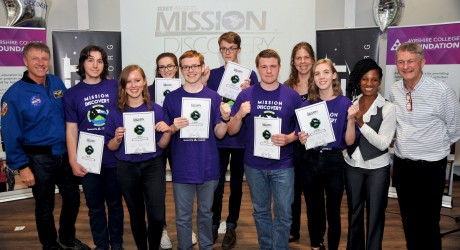 A TEAM of secondary school pupils and college students who created a space experiment at the Mission Discovery Ayrshire programme will now see their idea blast off into space!

The group triumphed at the International Space School Educational Trust’s (ISSET) space school, funded by the Ayrshire College Foundation and hosted by Ayrshire College at its Ayr campus, after beating 23 other teams’ ideas with their fascinating experiment.

Astronauts will now carry out that experiment – which looks at the speed of slime mould on different materials in space – at the International Space Station (ISS) after judges, including former NASA astronaut, Michael Foale CBE, deemed it worthy of winning the week-long space school competition.

Other finalists’ ideas included testing a foam designed to treat internal bleeding, carrying out an enzyme reaction experiment, and investigating Krill in space.

The Mission Discovery programme took place in Ayrshire for the first time thanks to the Ayrshire College Foundation’s backing.

Fifty pupils each from East Ayrshire, North Ayrshire and South Ayrshire secondary schools, and 50 pupils from Ayrshire College, worked in mixed teams over the week in a variety of team building exercises.

On the first day the groups came up with team names and Mission Patches for the week ahead. They then worked together to build a ‘Mars lander’ from different materials which would allow an egg to fall safely from the Riverside Building of the Ayr campus without breaking.

After hearing incredible space stories from retired astronaut Michael Foale and NASA’s Sarah Murray, the teams began designing their own experiments. While the ISSET team, and particularly Dr Julie Keeble, were on hand to help out with any questions, the teams had about the feasibility of their ideas.

The entire week was a major success with ISSET director Chris Barber telling the participants on the final day that Mission Discovery Ayrshire 2016 was one of the best programmes they have ever done.

Ayrshire College held a ‘Meet the Astronaut’ event for the public during Mission Discovery Week, and launched a network for their female Science, Technology, Engineering and Mathematics (STEM) students that featured a powerful keynote speech from Sarah Murray.

The college also launched its own instagram account at Mission Discovery with a fun competition challenging the participants to take the best ‘astronaut selfie’ for the chance to win a GoPro camera.

“Everyone who took part was brimming with excitement throughout the entire week and they will have learnt so much, not just about space and science but about themselves, over the course of the week.

“The standard of the finalists’ ideas was exceptional and I’m looking forward to monitoring the progress of the winning experiment when it gets launched to the International Space Station next year.”

Winning student, Laura Northwick, from Auchinleck Academy, said: “It’s amazing. I’m so surprised, we didn’t expect this. I can’t believe our experiment is going into space!”

Teammate, Pip Abrahamsson, from Kyle Academy, said: “I wasn’t sure what to expect this week but it’s been fantastic. I’ll definitely be watching my experiment take off to the International Space Station.”

Willie Mackie, Ayrshire College chair, said: “Mission Discovery has really engaged our students during what has truly been an inspiring week. I think they are all sad to see the programme come to an end.

“For the winning team to be able to say ‘my work is going into space’ is simply incredible and so I’d like to thank the ISSET team for delivering this programme, and the Ayrshire College Foundation for being able to bring it to Ayrshire.”

Councillor John Bruce, Cabinet Member for Education Attainment and Achievement at North Ayrshire Council, said: Mission Discovery Ayrshire 2016 has been a big success and afforded the young people who took part an experience they will never forget.

“We want to encourage our young people to take a greater interest in science and it is innovative programmes such as this which will spark their interest and, hopefully, demonstrate the fascinating options open to them in that field.

“In addition to promoting interest in science, Mission Discovery has also provided opportunities, skills and experience which will benefit all the young people who have taken part.”

Councillor Stephanie Primrose, East Ayrshire Council’s Cabinet Member for Skills and Learning, said: “The Mission Discovery event is a superb, down to earth way of encouraging our young people to reach for the stars.

“Space exploration is back in vogue and meeting a real astronaut was truly inspirational, giving us all a new perspective on what we can accomplish when the sky is no longer the limit!”