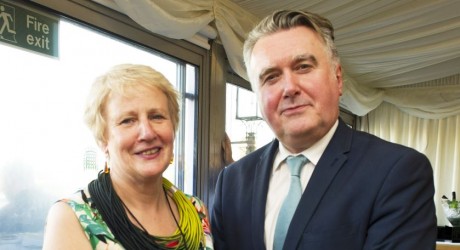 MEETING the growing demand for increased resources for BBC ALBA can deliver for both audiences and the Scottish creative economy, MPs have been told.

MG ALBA – which operates the BBC ALBA in partnership with the BBC – said the opportunity to achieve parity for the Gaelic language channel with Welsh counterpart, S4C, had the potential to unlock substantial benefits for independent production sector as well as secure the future success of the channel amongst its core audience.

At a parliamentary event held at Westminster, MPs were told about the desire from Gaelic audiences for the new Royal Charter to enshrine a commitment from the BBC to commit to ten hours of new programming for BBC ALBA per week – up from the current level of 4.2 hours.

This commitment would bring BBC ALBA into line with S4C, which has enjoyed ten hours of new programming per week from the BBC for the last 30 years.

It would also have a positive knock-on impact for the creative sector, which continues to benefit heavily from BBC ALBA. During 2015-16, BBC ALBA commissioned 454 hours of content from 26 different production companies.

MG ALBA chair, Maggie Cunningham, said: “Since the publication of the White Paper on Charter Renewal, we have seen growing momentum gathering behind a fairer deal for BBC ALBA.

“I’m pleased and grateful that MPs from across the political spectrum attended today to hear the compelling reasons why that deal is needed: to serve our audience properly and to boost the production sector in Scotland.

“BBC ALBA is currently allocated 3p of the £12.13 monthly licence fee. By comparison, the BBC spends more than 10 times that on S4C. However, we are not simply asking for more money. Existing BBC resources could and should be used more effectively to deliver for Gaelic audiences.”

Ms Cunningham highlighted last week’s publication of the Scotland Annual Review 2015-16 by the BBC Trust as evidence for the growing demand for improved BBC ALBA content.

Maggie Cunningham continued: “BBC ALBA has been an outstanding success since it launched in 2008 but it is clear that the channel has now reached a juncture where it needs more resources to continue its development. We have a repeat rate of 74 per cent and it needs to be tackled.

“The recent BBC Trust Annual Review report acknowledged that whilst the channel is continuing to outperform viewership targets, it suffers from under-funding which may not be sustainable in the longer term.

“It is our firm belief that one mechanism to address this issue is by increased sharing of content from other BBC departments. We have seen excellent examples such as the Hebrides series that was successful across both BBC ALBA and BBC Scotland.

“This is not to say that BBC ALBA simply requires more content handed down from the main channels – a more responsive system of programme-making within the BBC may allow us to collaborate far easier across a range of genres including children’s programming, music and documentaries. Increasing original content to ten hours per week does not have to mean a hugely increased pot of cash.”

The success of BBC ALBA’s Gaelic drama Bannan is one of a number of productions to provide a boost to the Highland & Islands creative economy and Ms. Cunningham added its success could be built upon if BBC ALBA was strengthened with more original programming.

Ms Cunningham added: “The channel has had a very positive impact on the independent production sector: around half of all independent production commissions in Scotland are made by BBC ALBA and a recent economic impact report confirmed that almost 300 jobs result from MG ALBA’s activities, 40 per cent of which are based in the Highlands and Islands. This includes BBC ALBA drama Bannan which has undertaken the majority of its production on the Isle of Skye.

“We are determined to improve even further on that and we are determined to ensure the next generation of creative talent has a platform to flourish. With a better base of original programming from the BBC for the channel – some of which may be conceived in cooperation with independent producers – there is more scope for enhancing Scotland’s creative sector and the economic benefits that brings.”