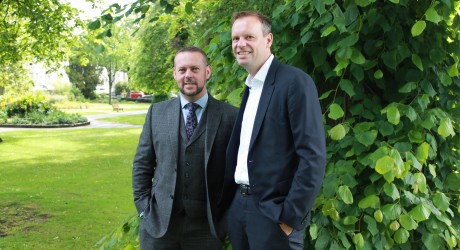 ONE of Scotland’s leading food waste recycling firms is gearing up for future growth with the appointment of a strategic commercial director as the company eyes potential acquisitions.

Keenan Recycling, which is headquartered in New Deer in Aberdeenshire, with a second base in Linlithgow in the Central Belt, has ambitious plans to grow turnover from £7m to between £30-£40m in the coming five years.

The firm, which recycles food and garden waste into compost, expanded into the central belt last year opening the office near Edinburgh and investing in an eight-acre site for development in Linwood, near Glasgow, with the support of a £2.2m injection from Business Growth Fund.

With plans to grow the business by taking on more sites and capitalising on the market south of the border, Keenan Recycling has appointed mergers and acquisitions specialist, Ritchie Clark, as the firm’s first commercial director.

Mr Clark, 39, a qualified chartered accountant, worked in banking and equity with the Bank of Scotland before holding a director position with international investment banking firm, Simmons and Company, for the past six years specialising in managing and advising on deals in the energy industry.

He said: “I specifically wanted to be part of an owner managed company and Keenan Recycling has a vast amount of growth opportunities on the horizon, which will allow me to bring my M&A expertise to the fore.

“I’m commercially focussed and strategic in my approach so I will be well placed to guide them on future deals across the UK.”

Managing director of Keenan Recycling, Grant Keenan, sees the appointment as a crucial role in helping to shape the future growth of the firm to a wider market.

He said: “We are focussed on growing through acquisition and our decision to bring this level of expertise to the board will support and drive our ambitious growth plans.

“Ritchie’s depth of experience from previous senior roles will help us to consider the bigger picture when approaching potential deals in the future. With Ritchie on board and our recent appointment of Jim Clark along with Business Growth Fund at the table, we have a world-class team that can now create something truly special.”

Keenan Recycling launched its commercial food waste collection scheme in 2010 to help businesses divert food waste away from landfill, and it now has a team of 80 employees across the North-east and central belt.

Similar legislation is now in place in Wales and Ireland and Keenan Recycling is set to focus on an acquisition in England over the coming months to be in position for any forthcoming changes south of the border.

Keenan Recycling launched the commercial food waste collection scheme in Aberdeen and Aberdeenshire in 2010, becoming the first company in Scotland offering organisations the opportunity to recycle items such as leftover food, coffee grounds, cups and paper towels turning waste into British Standard Industry accredited compost for farming and horticultural use.