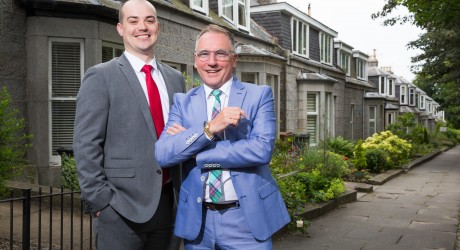 AN Aberdeen property management company has been reaping the benefits of completing a successful merge with one of the Central Belt’s most prominent factoring and residential letting firms.

Watt and Co Property Management, launched in 2007 by Aberdeen businessman, Ross Watt, has joined forces with Newton Property Management in a substantial six-figure deal, which is the Glasgow firm’s first move into the North-east market.

As part of the merger, Mr Watt has become a director of Newton Property Management and has taken a position on the board, along with a shareholding in the overall business, and the six members of staff based at the Aberdeen office in Rosemount Place have all been transferred over to the new owners.

Thirty-three year-old Mr Watt, a graduate of entrepreneurship from Aberdeen University, built the business from scratch focussing primarily on factoring and residential leasing. At the time of the merger, the company had 1,000 factored properties and 60 leased properties on its books across the North-east.

Newton Property Management, which is expecting to see a £15m transactional turnover this year, is headquartered in Glasgow and has 40 members of staff currently managing 16,000 factored and 600 leased units across the whole of Scotland.

With offices in Glasgow, Aberdeen and Inverness, the firm has bought three additional companies, including Watt & Co, in the past 12 months as part of its ambitious expansion plans.

Since the merger completion and with the further acquisition of Greenhome Property Management, the Aberdeen office has seen a stock increase of 70 per cent and expanded its geographical spread south to Dundee and St Andrews.

Despite the current uncertain market in Aberdeen, managing director of Newton Property, Stephen O’Neill, is confident it is one of the best acquisitions they have made. He said: “We chose to invest in Aberdeen as we believe wholeheartedly that this city will make a fairly quick recovery. We have invested in Ross in particular as he is a rising star on our Board and he has a great future with the business.

“The current market here doesn’t frighten us. We have continuity in this business and, if we keep looking after our clients, we won’t lose them.

Ross Watt, director of Newton Property, said: “Joining forces with Stephen and his expert team has only further enhanced the service we provide to our clients across the North-East.

“Newton Property is an owner-managed business and boasts a similar ethos to the business I built in Aberdeen, so our team here has merged seamlessly with the existing support team in the Central Belt ensuring we are all focussed on delivering the same end goals.

“It’s an exciting opportunity, not just for me personally, but also for my team as we can reap the benefits of being part of a bigger operation with a superb support network.”

Under Newton Property, the Aberdeen team will now focus on growing the factoring element of the business, including targeting the city’s traditional granite tenements, as well as continuing to manage residential property leasing.