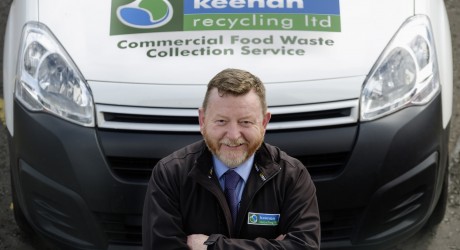 KEENAN Recycling is gearing up for further growth in the Central Belt after making a key senior appointment at its base in Linlithgow.

The Aberdeenshire-based company, which expanded into Central Scotland in April 2015, has named Tom Lennon as its transport and operations manager.

His career in the transport industry has also included senior roles with MKG Foods and United Freight Distribution.

In his new role with Keenan Recycling, Mr Lennon will be managing the company’s nine vehicles in the Central Belt and will be involved in the recruitment and training of the firm’s expanding workforce.

Grant Keenan, managing director at Keenan Recycling, said: “Tom has a fantastic combination of experience in both the transportation and waste management sectors.

“He has exactly the set of skills that we wanted to help us plan new routes to serve customers in Central Scotland and to help us manage our growing team in Linlithgow.

“We had 60 applicants for Tom’s job, so he really is the best of the best.

“It’s great to be able to welcome Tom to our team and I wish him every success in his new role.”

Mr Lennon added: “Keenan Recycling is the fastest-growing company that I’ve ever worked with.

“I’ve never seen growth like this, not even from the blue-chips.

“My role at Keenan Recycling will involve making the routes more efficient and managing the drivers during the exciting period of growth that lies ahead.”

Keenan Recycling, which was founded in 2001, is a family business that’s grown to become one of Scotland’s largest food and garden waste collection companies.

At its head office at New Deer, north of Aberdeen, the company turns organic waste into compost, while it has also recently acquired an eight-acre site at Linwood, near Glasgow.

Organic waste taken to Keenan Recycling’s 14-acre facility at New Deer is turned into compost that is used in the agricultural and horticultural sectors, reducing the need for artificial fertilisers.

Food waste collected in Central Scotland is taken to Scottish Water at Cumbernauld, where it is turned into fuel for anaerobic digesters (ADs), machines that use bacteria to produce renewable energy through biogas.

The company’s rapid expansion has been backed by BGF (Business Growth Fund), the independent provider of growth capital.

BGF invested £2.2 million into Keenan Recycling in September 2015, which has allowed the company to expand from its heartland in the North-East of Scotland into the Central Belt.

As part of the deal, Jim Clark – founder of oil and gas waste management company, MSIS – joined the board of Keenan Recycling as its chair.

The next stage in the business’s development is the opening of a branch south of the Border, which is expected to happen later this year.

BGF was founded in 2011 by five of the UK’s biggest banking groups – Barclays, HSBC, Lloyds, Royal Bank of Scotland and Standard Chartered – to provide growth capital for British companies.

The £2.5bn fund normally makes an initial investment of between £2m and £10m in privately owned or Alternative Investment Market-quoted companies in return for a minority equity stake and a seat on the board.