Media Release: One year to go until The BIG Stampede invades Hamilton 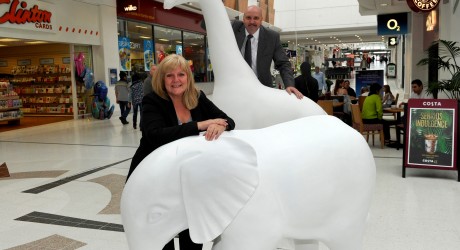 THERE’S just one year to go until Hamilton is transformed into a safari animal kingdom and two local businesses have already signed up to support the creative tourism project and raise funds for charity.

The Regent Shopping Centre in Hamilton and UK Steel Enterprise (UKSE) in Bellshill are leading the charge of local companies to join the pack.

Launched in partnership between Hamilton BID and Wild in Art, The BIG Stampede will see a herd of elephants, tower of giraffes, pride of lions, band of gorillas, crash of rhinos and pod of hippos descend on the town in summer 2017.

The large-scale free public art event will bring businesses, artists and schools together to create a spectacular and colourful scuplture trail which will raise valuable funds for Glasgow Children’s Hospital Charity.

The safari squad is underway with The Regent Shopping Centre pledging its support of a giant giraffe and UKSE, which specialises in supporting businesses and the local community in the traditional steel producing area, sponsoring an elephant.

“The project is great for our shoppers, for the centre, for Hamilton and for such a great charity. The event will bring great colour to the town and to the region and will be a strong reason for people across Scotland to visit Hamilton and of course shop over the next 12 months.”

Anne Clyde, regional manager for Scotland at UKSE, said: “We have been working hard over the past 40 years supporting the local community in the area. This project is exactly the type of event we are keen to be part of; it will attract visitors to the region and bring the community together.”

The sponsored giraffe and elephant will be transformed by local and national artists before taking up residence on the safari trail, which will lead visitors and locals around the streets, parks and open spaces of Hamilton and the surrounding areas and will benefit the economic, social and cultural life of the town.

Young people will also have the opportunity to get in on the action through The BIG Stampede’s educational initiative, which will work with local school pupils creating their own miniature sized hippo sculptures to go on display as part of the trail.

The BIG Stampede has a selection of sponsorship options available including the Safari Trail Sponsor and Safari Charity Sponsor packages, as well as the Safari Community & Education Sponsor option, which is a fantastic opportunity for businesses to associate their brands with a large-scale education and community project engaging hundreds of young people.

The safari trail will go on display from June to August 2017, before being auctioned in aid of Glasgow Children’s Hospital Charity. Trail maps will be available from shops, libraries, community centres, hotels and other attractions and a smartphone app will include incentives and rewards for visitors who scan different safari animals on their phone.

Gareth Walker, BID Manager at Hamilton BID, said: “We’re excited to be starting the one year countdown with two great businesses on board.

“The BIG Stampede will celebrate the creativity of the area, offering a great day out in Hamilton all while raising money for a fantastic cause. We’ve got a great mix of sponsorship opportunities available to help businesses of all sizes be part of our pack, including an exciting Safari Community & Education Sponsor package.”

Wild in Art is one of the leading creative producers of mass-appeal public art events which bring together business and creative sectors with schools and local communities through the creation of city-wide trails of uniquely-painted sculptures.

The BIG Stampede follows in the footsteps of Hamilton BID’s inaugural project with Wild in Art in 2014 which saw 25 giant Clydesdale horses and 30 mini ponies canter into town as part of the Ready Steady Gallop campaign which raised £67,800 for Kilbryde Hospice.

Sally-Ann Wilkinson, director at Wild in Art, said: “We’re thrilled The Regent Shopping Centre and UKSE have signed up to help bring The BIG Stampede sculpture trail to Hamilton. Artists, businesses, visitors and residents – watch out, the stampede is on its way!”

For further information about The BIG Stampede and to find out about sponsorship opportunities, visit www.thebigstampede.co.uk.