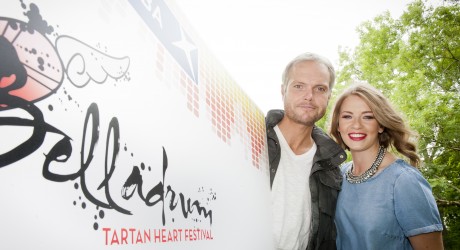 SUMMER continues on BBC ALBA as The Tartan Heart Festival returns to our TV screens with three exclusive programmes live from Belladrum.

Fans can keep up with the musical action as Fiona MacKenzie and Niall Iain MacDonald host three nights of spectacular live music on BBC ALBA, starting on Thursday 4th August, with further festival highlights to follow.

The 13th annual Tartan Heart festival takes place in the Scottish Highlands, at the Belladrum Estate near Inverness.

The festival’s main stage, housed in the estate’s idyllic Italian walled garden is the central location for three nights of music and festival colour on BBC ALBA, including some special acoustic sets.

Festival favourites, The Darkness, are guaranteed to keep the party going, with their winning combination of rock and pop hooks.

Belladrum 2016: Cridhe Tartan is produced by Bees Nees Media for BBC ALBA and the first episode will be broadcast live on Thursday 4 August at 9.30pm, followed by 9pm on Friday 5 August and 9pm on Saturday 6 August.