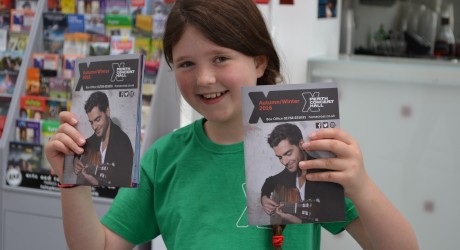 PERTH Youth Theatre is celebrating 50 years of young talent, with a series of events in the brand new brochure from Horsecross Arts.

As well as masterclasses delivered by PYT alumni and workshops across Perth and Kinross, there will be a 50th Anniversary Gala Concert performed by the full Perth Youth Theatre Company (P1 to S6).

This one-off special event at Perth Concert Hall will include nods to past Perth Youth Theatre productions as well as new elements devised by current members.

The celebrations are just part of a busy season of music, drama and events in the autumn/winter brochure launched by young PYT members, Emily and Ross Baillie.

An all-star cast – including Paul Riley from Still Game and River City’s Joyce Falconer -bring DC Thomson’s The Broons to life in a brand new production.

And, there is a once-in-a-lifetime opportunity to see the longest-running show in British theatre – Agatha Christie’s nerve-shredding murder mystery, The Mousetrap.

Brochure cover star – dazzling guitarist, Miloš Karadaglić – goes on a journey from Bach to the Beatles with the Royal Northern Sinfonia in Perth Concert Hall.

The musical legacy of Johnny Cash is celebrated in The Johnny Cash Roadshow and The Greatest Love of All: The Whitney Houston Show features the best-loved hits from one of the world’s most revered singers.

Dougie MacLean returns with his Perthshire Amber Festival, accompanied by friends from across the world of traditional music.

The intimate Norie-Miller Studio hosts films with live accompaniment; The Graeme Stephen Trio’s The Cabinet Of Dr Caligari and Metropolis to a score by Dmytro Morykitas, as well as the regular Perth Film Society programme.

Plays for young people include Invisible Army and Pondlife and there is an opportunity to meet Ronnie Browne in Meeting Ronnie the guy fae The Corries.

The Nutcracker presented by the Russian State Ballet and Opera House gets Perth Concert Hall’s festive season off to a sparkling start.

Phil Cunningham and his musical pals reopen his Christmas songbook for an evening of music and laughter.

And the team behind last year’s monster pants success, Beauty and the Beast, return to their temporary home under Perth Concert Hall’s proscenium arch with the purrfect family Christmas treat: Dick McWhittington.

For full info about what’s on in Perth Concert Hall in the upcoming season visit www.horsecross.co.uk or call Horsecross Arts Box Office on 01738 621031.

MEDIA RELEASE issued by Horsecross Arts. You too can share your stories (aka press or media releases), on allmediascotland.com. Email here for more information.