Media Release: Debut Edinburgh novel to pop-up around the capital this weekend 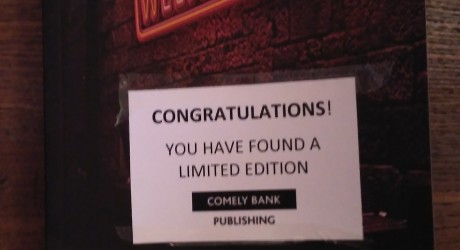 Weekender follows various characters over a weekend set in Edinburgh’s recent past, the story moving from one character to the next as their paths cross. Over three days it explores a city of contrasts: sex, drugs, violence, love, family, betrayal, redemption and despair.

Roland, who was born in Edinburgh in 1979, originally thought of the idea back in 2000 and the journey to publication has been as compelling as the novel itself.

Roland said: “I never imagined it would take this long to get Weekender finished and published.

“They say writing a novel can be a long journey but I seem to have taken it to a new level! A huge thanks goes to the amazing people at Comely Bank Publishing who turned my dream into a wonderful reality.”

Comely Bank Publishing was set up by author, Gordon Laurie, in 2012 to give Scottish writers additional options for self-publishing and for writers to share their experiences and expertise.

Gordon said: “I set up Comely Bank Publishing because I genuinely believe that too many authors are failing to have their works published.

“The future of literature can only be saved if bright new talent is nurtured as it used to be.

“Here at Comely Bank Publishing, we want to share our experiences so that others who want to self-publish can benefit from what we have learned along the way.”

Being Festival time, and with Edinburgh chock full of artistic and literary talent, Roland is embarking on a promotional campaign over a weekend (obviously!) that will see limited edition copies pop-up around the city between 19th and 21st August.

The aim is get Weekender travelling around the world, with finders asked to read their copy and then leave it where someone else will pick it up.

People will be able to log and track the journey on social media:

For more information and to obtain high-resolution pictures, please email rolandtye@comelybankpublishing.com or phone 07979 121150

Enjoy, and remember – a lot can happen in a weekend…

Currently, the co-operative concentrates on fiction, including short fiction, although it is open to other work as well. Comely Bank Publishing does not seek to make profits out of its authors, but looks to form a group of authors who help each other develop and, as a result, it can afford to be open-minded about what it publishes.

Comely Bank Publishing is based at:

MEDIA RELEASE issued by Roland Tye. You too can share your stories (aka press or media releases), on allmediascotland.com. Email here for more information.