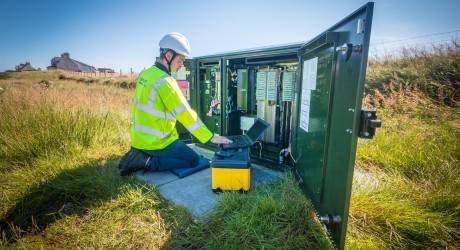 THE remote community of North Tolsta on the Isle of Lewis is the first in Scotland to test a new technology to increase the speed of fibre broadband over long phone lines.

Around 20 households in the Outer Hebrides village have been identified to take part in the technology test – known as a proof of concept (PoC) – by Openreach, BT’s local network business.

The technology, known as Long Reach VDSL, was deployed in the last few days and initial results are encouraging with most households seeing significant increases in their fibre broadband speeds.

The village – popular with surfers thanks to its long, sandy beach – was chosen due to its remoteness and that fact its fibre cabinet supports a cluster of long lines.

Broadband speeds can reduce over significant distances and Openreach is keen to find a solution to that challenge. This is particularly the case given it shares the UK government’s ambition that all premises receive a minimum of 10Mbps regardless of how remote they are.

Openreach CEO, Clive Selley, said: “Getting faster speeds to rural communities is one of my biggest priorities, so testing new solutions in the field like this is a crucial part of that process.

“This is a British innovation story, and our world class labs are pioneering a technology which could improve speeds for thousands of homes and businesses across Scotland and the rest of the UK – particularly those connected by long lines that are between 2.5km and 3.5km away from the cabinet.

“Our lab tests prove that Long Reach VDSL has the potential to significantly boost speeds over such lines, which are typically found in remote parts of the UK.

“I’m pleased that North Tolsta is the first Long Reach VDSL test site in Scotland and the early results are very positive. This trial will provide engineers with more information on how the new technology works in one of the UK’s remotest locations.”

Long Reach VDSL operates at higher power levels and makes use of a wider range of frequencies to increase broadband speeds and the distance over which they can be delivered.

Openreach has moved eligible North Tolsta lines to the new technology and if it proves successful, they will remain in operation at the higher speed for the foreseeable future.

Brendan Dick, BT Scotland director, said: “It’s fantastic that Openreach is coming to Scotland to test a new technology in the real-life setting of a remote community. I hope people in North Tolsta will be first to benefit as they help us find an answer to the challenge of delivering faster, fibre broadband over longer lines.

“I’m acutely aware of the frustration this causes for those at the end of these lines. We’re working hard to develop technology to help us fill the remaining gaps in the UK’s high-speed broadband jigsaw. This is a significant part of the puzzle, and if successful, North Tolsta could have another reason to be popular with surfers.”

Openreach plans to hold further trials of the technology in a number of locations around the UK. More details will be announced in due course.

MEDIA RELEASE issued by BT Scotland. You too can share your stories (aka press or media releases), on allmediascotland.com. Email here for more information.