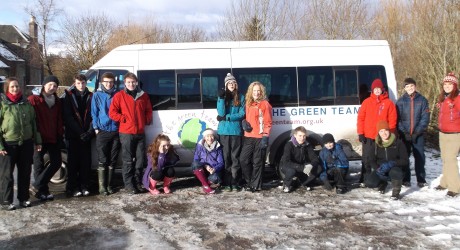 BUDDING artists attending Edinburgh’s High Schools will be excited to learn about a competition which could literally see their design all over town.

Award-winning environmental charity, The Green Team, has launched a design competition to find an inspiring new landscape for their minibus.

Thanks to significant fundraising efforts by the organisation and support from the Big Lottery Awards for All Fund and Garfield Weston Foundation, The Green Team were able to purchase a much-needed replacement minibus earlier this year.

Sadly, the shiny new minibus lacks the distinctive livery that their previous vehicle displayed and so they are calling on the artistic skills of the young people that their work supports to give it a very special makeover.

Last year, The Green Team ran 205 project days to sites all over Edinburgh and the Lothians and as far as Arran for a Gold Duke of Edinburgh Residential.

Entrants can be certain that the winning minibus design will catch the eye of a significant number of people!

The competition is open to all High School pupils in Edinburgh, where the voluntary organisation has been based for over 20 years.

The winning design will then be transformed by Edinburgh signage company, Baillie Signs, to adorn the new minibus that transports their young conservation volunteers throughout the city and beyond.

Entries for the competition must be received by 16th September 2016 with the winning design being announced at The Volunteer Recruitment Fair in Edinburgh on the 21st September.

Entry forms and design templates can be downloaded from the organisation’s website, www.greenteam.org.uk.

The Green Team is an environmental organisation based in Edinburgh which receives its core funding from Scottish Natural Heritage.

The charity works with young people to restore and conserve wild places as an important part of learning about the natural heritage of Scotland.

Young people carry out projects centred around a conservation task, and time is also spent exploring the countryside and taking part in environmental activities such as art, games and crafts.

Since 1995, over 4,000 young people have worked with the Green Team improving their local area, learning about the countryside and achieving a range of awards such as the John Muir Award and Duke of Edinburgh Award.

In 2014, The Green Team were worthy winners of the RSPB Nature of Scotland Awards Youth and Education Category.

MEDIA RELEASE issued by The Green Team. You too can share your stories (aka press or media releases), on allmediascotland.com. Email here for more information.