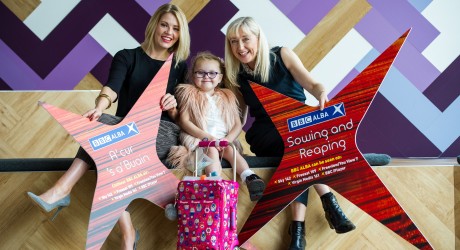 Some of the new programmes featuring in the autumn line-up include:

Home from Home, a poignant documentary following some of the children and families who attend Scotland’s two children’s hospices, Rachel and Robin Houses.

One of their visitors is five-year-old Eilidh from Alloa, who has a life-shortening illness – Chronic Intestinal Pseudo Obstruction with intestinal failure.

Eilidh was referred to the children’s hospice Robin House in Balloch when she was only two years old. Eilidh and her whole family love it at Robin House and all go there around four times a year for respite care.

Hamish, a compelling and heartfelt tribute to the leading poet, intellectual and songwriter, Hamish Henderson, which has been co-funded by Creative Scotland. Scottish filmmaker, Robbie Fraser, directed the film which provides an insight into Henderson’s journey from orphan to cultural hero – as well as being cited as the catalyst for the folk revival in Scotland.

Folk-singer, musician and writer, Steve Byrne, who has been published in two volumes of the life and work of Hamish Henderson, was in attendance to perform one of Henderson’s best known songs ‘Freedom Come all Ye’.

For sporting viewers, Jimmy ‘Jinky’ Johnstone, a feature-length personal profile of the legendary Scotland and Celtic football player, which includes tributes from his wife, children, friends and fellow team mates.

Sàr-sgeoil / Outlander explores the locations across Scotland which are the backdrop for the Outlander novels and the popular TV drama.

Cathy MacDonald meets Diana Gabaldon, the multi-million-selling author of the Outlander novels, to understand how Scottish history provided the inspiration for the chronicles and travels to some of the locations that are attracting Outlander fans from across the globe.

BBC ALBA’s original Gaelic drama,  Bannan, will return in the autumn with its third series and filming in Skye for the fourth series already underway.

The channel also welcomes two new presenters, Kim Carnie (age 22 from Oban) and Mark Smith (age 19 from Shawbost, Lewis) who will be making their debut when they join the team on the ever-popular children’s programme, Dè a-nis?, now in its 24th series.

Margaret Mary Murray, head of Service for BBC ALBA, said: “We hope our new schedule will surprise and delight viewers of all ages across Scotland with the range and quality of new programmes from drama to factual documentary, sport, music and children’s delivered by some of the best programme producers and finest independent companies in Scotland.”

Among the highlights for this season are:

BBC ALBA is delivered through the partnership set up between the BBC and MG ALBA, the Gaelic Media Service, a unique broadcasting partnership providing a successful public service.

Pictures from the event will be available from Media House and will be distributed to all picture desks.