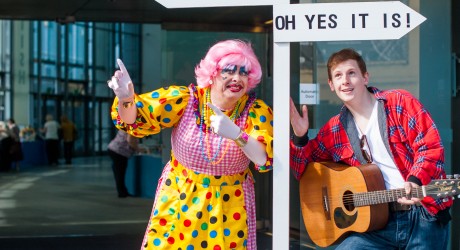 A CAST of returning favourites – including Perth’s regular dame, Barrie Hunter – is lining up for this year’s traditional family panto, Dick McWhittington.

Staged once again in Perth Concert Hall, as work continues to restore and redevelop Perth Theatre, Dick McWhittington is written by Alan McHugh and directed by Ian Grieve, and features many of the team members behind last year’s monster success, Beauty and the Beast.

Commenting on his sixth year as Perth’s much-loved panto dame, Barrie Hunter said: “I am absolutely delighted to be back in Perth for panto again this year.

“It was a total blast last year, and I can’t wait to get the frocks and wigs on and cause havoc, mayhem and general silliness with the brilliant Perth audiences – they’re always up for a laugh, a song, a dance and whatever else we throw at them (maybe a wee sweetie?). I cannae wait!!”

Dick McWhittington is on his way to London to seek fame and fortune and doesn’t know that it is his destiny to save the city from an invasion of rats and become Provost.

It’s up to Perth’s very own fairy godmother, the Fairy Maid of Perth, to bring him back. But Dick won’t be alone.

He’ll stand side by side against Queen Rat with his very own ratcatcher – Kitty Cat – for a final showdown in the desert Kingdom of the great Sultan Vinegar.

Meanwhile, Stanley Mills’ sweetie shop has been cleaned out by the rats, but he has a bigger problem in trying to avoid the affections of his shopkeeper, Senga McScruff. And how will our loveable numptie, Wee Sandy McScruff, cope when the love of his life, Melody Mills, falls for Dick?

To find out, join Dick and his friends in Perth Concert Hall from Saturday 10 December until Monday 26 December for another spectacular, fun filled, family panto from the team that brought you Beauty and the Beast.

MEDIA RELEASE issued by Horsecross Arts. You too can share your stories (aka press or media releases), on allmediascotland.com. Email here for more information.