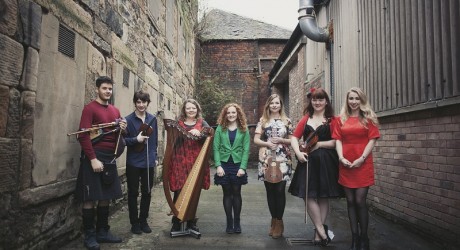 EIGHT top young folk musicians are heading out around Scotland over the next three months.

The tour is of the finalists and winner of the BBC Radio Scotland Young Traditional Musician of the Year Competition (2015) and organised by the TMSA (Traditional Music & Song Association of Scotland).

Winner, Claire Hastings, explains how it works: “We all get to play in our home towns so not only do we get to visit some of our old stomping grounds we get to show off the local sights to fellow finalists.

“No doubt there will be some friendly competition to see whose town has the best crowd…oh and the best place to eat!”

TMSA convener, Fiona Campbell, added: “We are delighted to once again showcase some of the brightest stars in Scotland’s traditional music scene and I continue to be impressed with how such diverse artists work so well together.

“The album has an amazing range of material which brings out the talents of each of the finalists as well as capturing the spirit of the group so ably coached by Corrina Hewat and Anna Massie. I have no doubt the live performances will wow audiences across Scotland.”

The tour kicks off on Thursday 6 October at The Tower in Helensburgh then visits Castle Douglas, Shetland, Skye and Dunblane.

Alan Morrison, head of Music at Creative Scotland said: “Claire Hastings’s debut album Between River And Railway is one of the best Scottish releases this year in any musical genre.

“However, it’s just one piece of evidence that an amazing generation of new talent is currently emerging right across Scotland’s traditional sector, as the line-up of the TMSA tour so ably proves.

“This tour – and the accompanying collaborative album – offer an exceptional opportunity for audiences to hear Scotland’s future folk heroes today.”

Gemma Donald is described by fellow Shetland fiddler Aly Bain as “one of the finest players in the country” and this is reflected in the fact she has won every major fiddle competition in Scotland, including the coveted Glenfiddich Fiddle Championship in 2006, and in 2011 became the first person to retain the Amber Fiddle Award at Perthshire Amber.

Heather Downie grew up in Dunblane and decided that a career in traditional music was definitely for her after working with the late Martyn Bennett. She plays in Top Floor Taivers and is director of Harp Bazaar, a fast-growing business in harp tuition and performance.

She has recorded two albums and toured extensively with Barluath, won several awards including The Silver Pendant at The Royal National Mòd in 2013 and is currently juggling several songwriting and singing projects.

Claire Hastings is a Scottish folksinger, songwriter and ukulele player originally from Dumfries.

One of the most memorable tracks on the album, ‘That B&B in Dundee’, was written by Claire following an eventful night on the road.

Be sure to listen all the way to the end for the surprise punchline!

Claire performs as a solo artist, with The Claire Hastings Band and alongside Heather Downie in Top Floor Taivers. She released her debut album, Between River and Railway, in April this year, receiving sterling reviews.

The youngest member of the group, Séamus Ó’Baioghill grew up on the Isle of Skye steeped in West Coast Gaelic Highland tradition. He has only just left school so remembers well the days of running home from primary school to get a wee sleep to be able to tag along with his father to the many local music sessions. It was here that musicians encouraged Séamus to ‘have a shot on the fiddle’ – and for that, he will be forever in their debt.

Winner of BBC Radio Scotland Young Traditional Musician 2014, Robyn Stapleton, sings the songs of her Scottish and Irish heritage, performing throughout Scotland and internationally. Keen to pass on her knowledge of traditional music and culture to others, Robyn has a strong reputation as a song leader and tutor and was made an Ambassador of the Scots Language in 2015.

Her debut album, ‘Fickle Fortune’ has received outstanding reviews and she is looking forward to recording her second album in the year ahead.

In September 2016, Ryan began recording his debut album with Jesse Lewis, a three-time Grammy winning producer.  A musical highlight was getting to perform with Dennis Cahill, one of his biggest inspirations, at Feakle Festival in Ireland 2015.

Accompanist, Anna Massie, is one of Scotland’s foremost guitarists.

A skilled multi-instrumentalist, she also excels on the fiddle, mandolin and tenor banjo. Renowned for her work with Blazin’ Fiddles and Mairearad Green, the past few years have also seen Anna perform with her own band, Bella Hardy, Julie Fowlis, Kate Rusby, Karen Matheson, Capercaillie and Eddi Reader. \

Anna is a past winner of the Young Traditional Musician award back in 2003 and is delighted to be assisting a ‘new batch’ of young musicians hoping they can also look forward to a successful career in the Scottish music scene.

Expect some brand new material written and composed by these fantastic young musicians, as well as some innovative arrangements of traditional tunes, all of which feature on the album which will be released on the night of the first tour date.

The album was recorded at Castlesound Studios, East Lothian, with musical direction from renowned composer, singer and harpist Corrina Hewat.

The TMSA Young Trad Tour – including both the CD and tour itself – has been made possible through funding support from The Robertson Trust, the National Lottery through Creative Scotland, Hugh Fraser Foundation and Sylvia Aitken Charitable Trust.

For further information on the tour, or for accompanying images, please contact the TMSA Young Trad Tour’s Project Manager, Emma Jackson, on 07815 833 591, or emmarjackson@hotmail.co.uk.