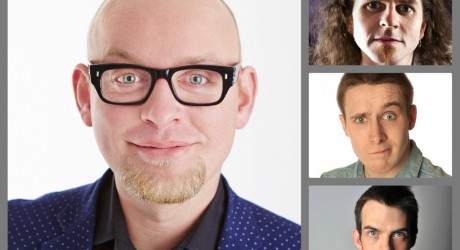 The regular crowd-pleaser, whose musings have warmth and easy-going charm, will be joined on stage by Glaswegian comic, Larry Dean, who’s a cut above your average ‘mainstream’ comedian, and Pat Cahill, the highly-inventive rising star of the comedy circuit, who highlights the absurdity in life with a combination of stories, songs with ridiculously funny lyrics and intriguing ‘facts’.

Nightingale, one of stand-ups brightest stars, is an affable, short, bespectacled, shiny-headed – and, by his own admission, ‘a bit of a tubby’ – comedian who delivers raucous and witty gags with energetic characterisations and killer punch lines.

His comedy is original, playful, intelligent and exciting; sometimes ridiculous and totally unpredictable… but always as funny as hell.

His infectious material which has been known to tackle swearing, Yorkshire, types of laughs, non-drivers, relationships, post-30 problems and the ‘shark-infested waters’ of online dating, together with his high-energy audience work and natural playfulness engages any crowd.

As well as developing his reputation as a top-class circuit headliner and in-demand MC and host, he has also done regular TV warm-up for the likes of Jonathan Ross, John Bishop and Celebrity Juice. His comedy podcast, Dan Nightingale’s In The House, is available on iTunes.

Friendly with an unique style, Larry also has a cheeky, boyish persona which lets him get away with some fairly lurid lines; plus he’s a pretty handy Elvis impersonator.

His bold and unapologetic style of comedy has been a fixture for several years and won him the title of Scottish Comedian of the Year 2013, aged just 23.

His debut Edinburgh Fringe show, Out Now!, was nominated for the prestigious Best Newcomer Award, delighting audiences with stories of coming out, stereotypes and ‘pride’ and prejudice (not the book). He went on to win the Amused Moose Comedy Award 2016 for this year’s Edinburgh show, Farcissist.

Pat Cahill is a comedian and musical talent whose unpretentiously surreal and absurd outlook has seen him win numerous awards and secured him firmly in the one-to-watch category.

Cahill won Best Newcomer at the Chortle Comedy Awards in 2012. He followed this with two shows for BBC Radio: Doggy Dilemma and Chick ‘n’ Mix and Still Reeling (a Channel 4 Blap).

Cahill specialises in dry, absurd philosophical theories and silly songs, where props are used to great effect and all done with an idea that the world is ridiculous. The sheer joy and silliness in his material is irresistibly funny.

For further information on Gilded Balloon Comedy at The Studio at The Festival Theatre, go to: http://www.gildedballoon.co.uk