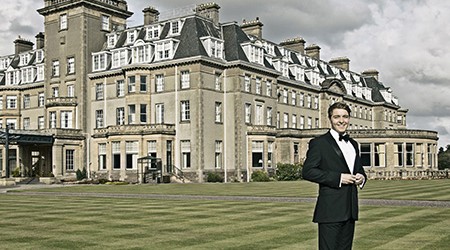 A YOUNG Scottish opera singer with a passion for golf has been named as the inaugural recipient of the prestigious Gleneagles Scholarship – created to support an exceptional performance student at the Royal Conservatoire of Scotland.

Jerome Knox, a 26 year-old post-graduate student at the Royal Conservatoire of Scotland’s Alexander Gibson Opera School, is the first young artist to benefit from the national conservatoire’s new partnership with the iconic Perthshire hotel.

Born in Middlesex to Scottish parents, Glasgow-based Jerome was awarded the scholarship in recognition of his exceptional talent and tremendous professional potential.

He will make his debut performance as the Gleneagles Scholar at a special Royal Conservatoire Gala Dinner at Gleneagles on Saturday 5 November, held in the five-star hotel’s grand Ballroom.

Jerome, who is proud of his close family connections with the Royal Conservatoire of Scotland, said: “My mother studied piano and voice at the then-named Royal Scottish Academy of Music & Drama in the 1970s so I’m thrilled to be following in her footsteps.

“It’s a privilege to be awarded this scholarship and I feel incredibly grateful. It will enable me to concentrate on my studies and support me in achieving my dream to become a professional singer, and I look forward to repaying the faith shown to me by both Gleneagles and the Royal Conservatoire.

As an avid golf fan, Jerome highlighted the happy coincidence of winning the Gleneagles Scholarship.

He said: “I absolutely love golf and Tiger Woods was one of my heroes growing up, as was the bass-baritone and keen golfer, Bryn Terfel. The parallels between excellence in sport and excellence in performance are abundant – because both demand patience, dedication and hard work – so being named as the first recipient of this scholarship is a huge honour.”

The Gleneagles Scholarship is just one element of a new partnership between Gleneagles and the Royal Conservatoire of Scotland – which provides opportunities to support, celebrate and showcase the next generation of world-class performing artists trained at the national conservatoire.

The partnership will also create high-profile performance opportunities for the students, including an annual symphony orchestra concert at the City Halls in Glasgow and an annual Gala showcase at Gleneagles.

Professor Jeffrey Sharkey, principal of the Royal Conservatoire of Scotland, said: “It’s a very great pleasure to see a young singer of Jerome’s quality given this invaluable support by Gleneagles to develop his potential.

“It is also wonderful for the nation’s conservatoire to partner with one of the nation’s finest international hospitality brands – and to work together with a shared passion for the future of the arts in Scotland.”

Bernard Murphy, Gleneagles’ managing director, said: “Jerome is an emerging artist of tremendous talent. We congratulate him on his achievement and look forward to watching him develop and evolve as a performer over the course of his studies.

“This partnership enables us to support and enrich the educational journey of all the students at Scotland’s national conservatoire, and allows both organisations to build on our well-established reputations for the delivery of excellence in the guest and student experience.”

Highlights will include the world-premiere of ‘The Gleneagles Fanfare’ – written specially for the evening and performed by the Conservatoire Brass Ensemble; virtuoso solo piano recitals; vocal studies featuring the works of Debussy, Tippett and MacMillan; and Handel’s Royal Fireworks Music performed by the RCS Chamber Orchestra.

The Gala Dinner event at Gleneagles forms part of a special overnight offer for hotel guests on Saturday 5 November, starting from £525 per room per night based on two people sharing a Classic Room.

In addition to the programme of classical music and operatic performance, guests will enjoy pre-dinner drinks, an Italian-themed three-course dinner, one night’s luxury accommodation in the hotel, use of the Club facilities, and full Scottish breakfast.

Guests can also stay on Friday 4 November for the reduced rate of £215 based on two people sharing a Classic Room including breakfast.

Baritone Jerome Knox – is the inaugural recipient of the Gleneagles Scholarship as he joins the Alexander Gibson Opera School at the Royal Conservatoire of Scotland studying with Scott Johnson. Jerome previously studied with Russell Smythe at the Royal College of Music, and is also a Classical studies graduate from the University of Edinburgh.

The Royal Conservatoire of Scotland is ranked sixth in the world for performing arts education and is the top higher education institution in Scotland for graduate employment, with 97 per cent of graduates in employment or further education within six months.

The Conservatoire is a national and international centre of excellence for the performing arts.

Building on our roots in 1847 as a national academy of music, we are now one of Europe’s most multi-disciplinary performing arts higher education centres offering specialised teaching across music, drama, dance, film and production as well as encouraging trans-disciplinary learning throughout our innovative curriculum. Around 900 students are currently pursuing degrees at RCS across our specialisms.

We work in partnership with the national companies, including the National Theatre of Scotland, Scottish Opera and BBC Scotland, to provide students with the very best learning experiences the Scottish landscape has to offer.

Based in the heart of Glasgow, RCS is also a busy performing arts venue; we host more than 500 public performances each year and issue around 64,000 tickets from our box office annually.

Additionally, we teach over 3,000 part-time learners every year through our Junior Conservatoire and Lifelong Learning Departments.

An iconic country estate set beneath the beautiful Ochil Hills, Gleneagles has been a luxury destination for nearly a century. Located just one hour from Glasgow and Edinburgh airports and with its own railway station, Gleneagles offers the perfect retreat for those looking for relaxation, fun and adventure.

Three championship courses have established Gleneagles’ reputation as a golfer’s paradise but the hotel offers so much more than golf.

The 850-acre estate epitomises the rugged natural beauty for which Scotland is famed and offers guests a glorious playground of country pursuits and activities. Whether you come to fly a Harris’ Hawk, ride horses, play tennis, go off-roading, train gundogs, shoot game, fish, enjoy Michelin-starred dining, or relax in an award-winning spa, Gleneagles offers a world of unforgettable experiences.