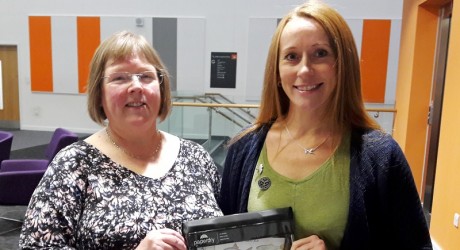 A DINGWALL student has received an award for completing the best environmental fieldwork across the University of the Highlands and Islands.

Andrea Goddard was presented with the 2016 Reid Environmental Fieldwork Prize for her research into roost holes made by treecreeper birds in giant sequoia trees around the Highlands.

With an interest in animal behaviour, Andrea wanted to establish if the birds prefer to roost on a particular side of the trees. The project, which was part of her environmental science degree, saw Andrea survey 890 roost holes in 40 trees at Culloden, Strathpeffer and at the Aigas, Brahan and Fairburn estates.

She concluded that the majority of treecreeper roosts are made on the east side of trees, away from the prevailing wind and rain.

Established in 2010, the Reid Environmental Fieldwork Prize is an annual award which recognises University of the Highlands and Islands students who have completed outstanding environmental fieldwork.

It is funded by an endowment which was given to the university’s Development Trust by the late Aberdonian scientist Dr Eric Reid and his wife Dr Joan Reid, who both enjoyed travelling throughout northern Scotland. As the recipient of this year’s award, Andrea received a £50 voucher which has she used to buy a selection of equipment for surveying birds and insects.

A keen environmentalist and wildlife campaigner, Andrea is now embarking on the second year of her environmental science degree at Inverness College UHI.

Speaking about her award, she said: “I’m delighted to have been awarded this prize! The environmental science degree course has taught me so much in a relatively short space of time and this project was an ideal opportunity for me to utilise the knowledge and skills.”

Donna explained: “Andrea was nominated after producing an excellent report for a first year statistics module, looking into the distribution of treecreeper roosts on giant sequoia trees. The nomination was fully supported by all module leaders who had taught Andrea.

“The data collection process involved a considerable amount of fieldwork and application on Andrea’s part, far in excess of what we would usually look for from a first year student.”