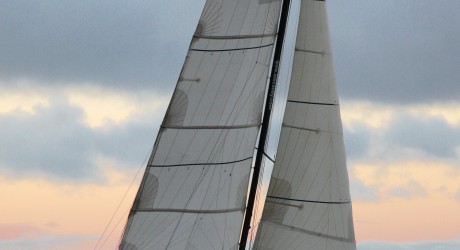 WITH a record set for sailing the length of Britain – from Land’s End to John O’Groats back in December 2015 – demand is high from sailors from across the world to take on the ‘Length of Britain Sailing Challenge’ and create a new record time.

Hailing from the UK’s most northerly mainland distillery, Dunnet Bay Distillery, Rock Rose Gin was a natural sponsor for the challenge.

The distillery has signed a three-year deal to establish the route from the strong sailing grounds of the south coast of England to the home of Rock Rose Gin, at Dunnet Head.

Excitement around the challenge has built since adventurer, Sean ‘the Beard’ Conway, ran, swam and cycled the distance, partnering up with a sailing team, including class 40 offshore racing yacht skipper, Alex Alley, and Phil Sharp from Jersey, to establish the record in December 2015.

Martin Murray, founder, Rock Rose Gin, said: “We are thrilled to announce our sponsorship of the Length of Britain Sailing Challenge. With the race finishing where we are based in the far north of Scotland it was a natural event for us to be part of. It’s such an exciting challenge and we look forward to welcoming any record-breakers to the distillery for a celebratory wee tipple.”

The national sailing tourism marketing organisation, Sail Scotland, have developed the challenge and will be the official body sanctioning entries to take on the current record of 83 hours 53 minutes.

Daniel Steel, CEO of Sail Scotland, said: “We are delighted to have Rock Rose on board as official sponsors of the Length of Britain Challenge.

“The journey between Land’s End and John O’Groats has always been an iconic challenge.

“With 876 miles in between, it represents the longest distance between two inhabited British points on mainland Britain.

“Sailing from the south of England up the west coast of Scotland is a beautiful and well-travelled route for sailors, which makes it all the more surprising that there was no established record.

“Now, we not only welcome people to take on that challenge but they have the added incentive of a Rock Rose Gin too, waiting for them at Dunnet Head.”

Gordon Ritchie of GRM, the event management company, said: “There is huge interest from sailors all now trying to win the Length of Britain trophy.

“The route can be really challenging and sailors will have to negotiate high winds, challenging currents, and uninhabited islands to break the record.

“We already have some world=class sailors preparing to do it and already have interest from an Australian all female crew and a top Irish Vendee Globe team member.

“We will also be announcing another sponsor in this exciting challenge in the next two weeks.”

Gail Ross, MSP for Caithness, Sutherland and Ross, who was on the pontoon last year, to greet Phil, Sean and Alex at 1am, said: “This is an exciting challenge which will not only provide a stunning backdrop but will also test the mettle of some of the best sailors in the world.

“In 2015, the challenge created a lot of positive publicity along the route and I look forward to the same happening again.

“The seas around the north and west coasts of Scotland are some of the most challenging and dramatic that exist, anything that helps highlight their power and potential is to be welcomed and I look forward to the Length of Britain challenge doing this.”

MEDIA RELEASE issued by GRM. You too can share your stories (aka press or media releases), on allmediascotland.com. Email here for more information.